Subspecies: Two subspecies are sometimes recognized; L. s. sphenocephalus and L. s. utricularius (Harlan, 1825).  Under this arrangement, the nominal subspecies is found in Illinois.  Some field guides (e.g., The Peterson Field Guide) continue to recognize utricularia as a full species and the correct name for the Southern Leopard Frog, but this name was suppressed by Opinion 1685, Anonymous, 1992, Bull. Zool. Nomencl., 49: 171-173.

Description: Medium-sized (5-9 cm SVL) light tan, green, brown, or mixed green and brown frog. Belly and undersides of legs white in life. Continuous pale dorsolateral fold, narrower and whiter than in the Northern Leopard Frog, extends from each eye along back. Back spots, sometimes fused together, rarely have white margins and are mostly smaller than eye. Some individuals have such a dark dorsum that the spots are almost invisible. As in other leopard frogs and pickerel frogs, but not crawfish frogs, there is a light line on upper jaw. External vocal pouches of males usually visible at corners of jaws.

Habitat: This is a species of broad ecological tolerance and is found in all sorts of shallow water habitats. In summer, individuals venture away from shorelines and into nearby weed-and-grass-covered fields where they feed.

Natural History: Similar in habits to Northern Leopard Frog. During the late February to mid-April breeding season, male produces breeding calls that sound like a mixed series of chuckles and groans. Female lays 1,000 to 4,000 eggs, and tadpoles transform by late spring/summer. May breed in autumn in southern counties. 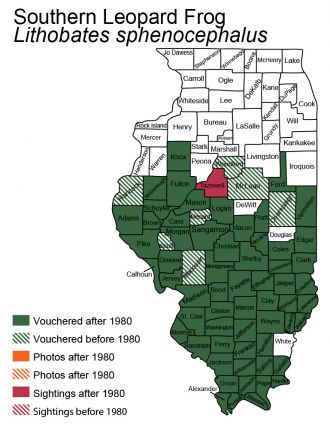 Distribution Notes: Found in a variety of habitats in all but the northern half of Illinois.

Original Description: Cope, E. D. 1886. Synonymic list of the North American species of Bufo and Rana, with descriptions of some new species of Batrachia, from specimens in the National Museum. Proceedings of the American Philosophical Society 23: 514–526.

Nomenclatural History: The taxonomic history of the Southern Leopard Frog is quite complicated. For details, see Brown, Smith, and Funk (1977, Bull. Zool. Nomencl., 33: 195-203). Until 1973, at least, R. sphenocephala was not distinguished from R. pipiens, so many references to R. pipiens may, in fact, refer to R. sphenocephala.  See Brown (1973. Speciation in the Rana pipiens complex.  American Zoologist13:73-79) for details of recognition of species. Other names may have been applied to this species in the Illinois literature, but it is difficult to be certain if reference was to sphenocephalus or one of the other leopard frogs when specific location information is lacking.  Garman’s “A preliminary report on the animals of the waters of the Mississippi Bottoms near Quincy, Illinois, in August, 1888”. (Illinois Laboratory of Natural History Bulletin 3(9):123-184) listed Rana virescens Cope, 1889.  This is almost surely in reference to the Southern Leopard Frog, given the location (Adams County).  Garman also listed Rana utricularia in his “A synopsis of the reptiles and amphibians of Illinois” (1892. Illinois Laboratory of Natural History Bulletin 3(13):215-388).  This is also a reference to L. sphenocephalus as he listed Union County as a location.  Smith (1961) used the combination Rana pipiens sphenocephala.

Frost et al. (2006, Bull. Am. Mus. Nat. Hist., 297: 369) removed sphenocephala (and most other North, Central, and South American ranids) from Rana and placed it in Lithobates based on extensive DNA sequence data, but not all workers agree with this arrangement because of the instability this brings to well-known taxa such as Rana catesbeiana. AmphibiaWeb recommends using Rana (Lithobates) sphenocephala to demonstrate that it is a member of the subgenus Lithobates while preserving long-standing taxonomy.