Natural History: Wormlike projection on floor of mouth effectively lures fish within range of jaws. Eats almost anything it can catch, including other turtles. Its eggs and young are eaten by a variety of predators including raccoons, skunks, otters, and fish. Humans are chief predator of large adults. Large female captured in Union County in late June contained 32 spherical eggs, the largest of which was 35 mm diameter. Gaping jaws and strongly hooked beak of enraged adult are efficient deterrents to most potential predators. 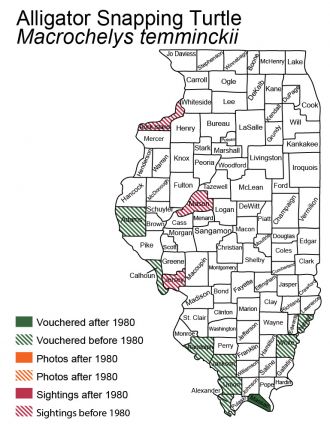 Distribution Notes: The status of the Alligator Snapping Turtle in Illinois has been the subject of extensive debate since the Illinois Department of Natural Resources announced plans to reintroduce the species to Illinois waters in 2005. With less than 20 confirmed records in Illinois, the species has been considered an infrequent visitor; the result of rare, long-distance migrants from the south via the large rivers. Ed Moll considered all records north of St. Louis questionable and considered the Big Muddy River and its confluence with the Mississippi River as the most promising area in the state to search for viable populations. The most recent record for the state is from “Clear Creek, 5 mi WSW Jonesboro”, Union County, IL, captured and released in 1984.

Original Description: Troost, G. 1835. In: R. Harlan. Medical and Physica Researches or Original Memoires in Medicine, Surgery, Physiology, Geology, Zoology, and Comparative Anatomy. L.R. Bailey, Philadelphia. xxxix + 653 pp. G. Troost is usually credited with authorship of this species because the description appeared in a footnote he wrote dated 11 February 1835 that was asterisked in the Chelydra serpentina species account in Harlan (1835).

Type Locality: “tributary stream of the Mississippi, which enters the river above Memphis, in West Tennessee”. Restricted to the Wolf River, Shelby County, Tennessee, USA by Bour (1987. Type-specimen of the Alligator Snapper, Macroclemys temminckii (Harlan, 1835). Journal of Herpetology 21 (4): 340-343)

Nomenclatural History: Was placed in the genus Macroclemys until Webb (1995. The date of publication of Gray’s Catalogue of Shield Reptiles. Chelonian Conservation and Biology. 1(4):322-323) established that Macrochelys has priority.  H. Garman (1892) used the name Macroclemys lacertina to refer to the Alligator Snapping Turtle in Illinois, but that is a junior synonym.