Similar Species: This is the only large ranid frog in Illinois with no dorsolateral folds extending past the typanum onto the back and no dorsal spots or blotches. See Key to Illinois Frogs & Toads for help with identification.

Natural History: Adult tends to be solitary. Eats any animal it can capture and swallow: arthropods, other frogs, snakes, even small mammals and birds. Bullfrogs have been introduced as food for humans in some parts of the world. Breeding male emits deep bass “jug-a-rum” breeding call. During long summer breeding season (April-August), males sometimes aggressively defend part of pond and mate with entering females. Thousands of eggs are laid in summer as a thin film on top of the water. Tadpoles overwinter and transform the following summer. 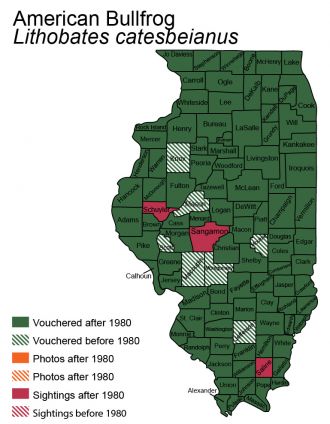 Nomenclatural History: Frost et al. (2006, Bull. Am. Mus. Nat. Hist., 297: 369) removed catesbeiana (and most other North, Central, and South American ranids) from Rana and placed it in Lithobates based on extensive DNA sequence data, but not all workers agree with this arrangement because of the instability this brings to well-known taxa such as Rana catesbeiana. AmphibiaWeb recommends using Rana (Lithobates) catesbeiana to demonstrate that it is a member of the subgenus Lithobates while preserving long-standing taxonomy.