Similar Species: Young western and upland chorus frogs are about the same size, but they do not have warty skin or a triangle between the eyes. See Key to Illinois Frogs & Toads for help with identification.

Subspecies: Blanchard’s cricket frog was formerly considered a subspecies of A. crepitans, but recent molecular evidence supports recognition at the species level (Gamble et al. 2008. Mol. Phylogenet. Evol. 48: 112–125). Prior to that, McCallum and Trauth (2006, Zootaxa 1104: 1–21) rejected the distinctiveness of A. c. blanchardi from A. c. crepitans based on morphology.

Description (modified from Smith, 1961): A small (up to 3 cm SVL) olive brown frog with toe-pads barely wider than second-to-last finger joint; extensive webbing between toes of hind feet; tibia 58% or more of body length; a few to many dorsal warts; light line from eye to each shoulder; dark stripe on posterior surface of thigh; white wart on each side of cloacal opening; numerous vertical, light bars on snout; belly pale except for dark throat of male; dorsal color variable, ranging from an elongate green or red stripe on back to no stripe (see pictures, above).

Habitat: Shallow margins of lakes, ponds, marshes, and streams, where they are active even in very cold weather.

Natural History: This small frog commonly leaps into water when disturbed, then almost immediately swims back to shore. Adult diet includes small terrestrial insects and spiders. Breeds usually from late April to August. Male calls while floating on water or on mats of algae or duckweed and emits a series of sharp clicks, cricketlike or like the sound of striking marbles. Female lays masses of 10-15 tiny eggs (up to 200 eggs total), which hatch in a few days. Tadpole has black-tipped tail and transforms by mid-September. 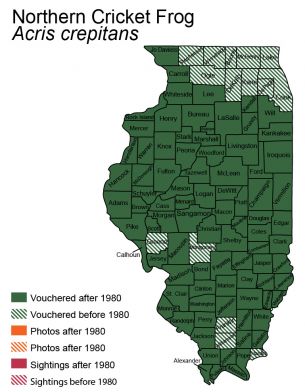 Status: Threats are not well understood. Once one of the most common frogs in the Midwest, but it has declined over much of its northern range, including extreme northern Illinois.

Nomenclatural History: In the past, all three species of cricket frogs we recognize today [A. crepitans Baird, 1854, Proceedings of the Academy of Natural Sciences of Philadelphia 7: 59-62; A. gryllus (LeConte, 1825, Annals of the Lyceum of Natural History of New-York 1: 278-282), and A. blanchardi Harper, 1947, see above.] were considered one wide-ranging species, A. gryllus, with several (3 or more, depending on which names are considered valid) variations or forms. This was due, in part, to Baird’s description of A. crepitans, which did not sufficiently differentiate it from LeConte’s description of gryllus; later investigators uncovered much more variation in both species than was known to the two earlier authors.  This is not surprising given the broad geographic range of Acris.

LeConte (1856) was among the first to attempt to carefully distinguish between crepitans and gryllus and considered them full species. Although many later authors reverted to one species (A. gryllus) with several variants [e.g., Boulenger (1882, Catalogue of the Batrachia Salientia s. Ecaudata in the collection of the British Museum. 2nd Edition. British Museum, London. 336, 337); Cope (1889, The Batrachia of North America. Bull. U.S. Nat. Mus. No. 34:15)], Viosca (1923, Copeia 1923 (115):36, 43) upheld LeConte’s belief that there were two distinct species, gryllus and crepitans, although he did not elaborate on the ranges of the two as his work was restricted to Louisiana and East Texas.

With the two species now accepted, but not geographically delineated, the third currently recognized species (A. blanchardi) was described as a subspecies of A. gryllus in 1947.  It was not until the 2008 molecular investigation of Gamble et al. ( Mol. Phylogenet. Evol. 48: 112–125) that all three current species were recognized.

Acris crepitans blanchardi  Conant, R. 1958. A Field Fuide to Reptiles and Amphibians of the United States and Canada East of the 100th Meridian. Houghton Mifflin Co.

Baird, S. F. 1854. Descriptions of new genera and species of North American frogs. Proceedings of the Academy of Natural Sciences of Philadelphia 7: 59-62.