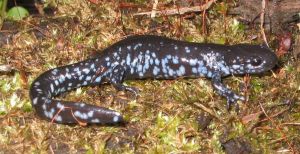 Description: A medium-sized (up to 13 cm TL), nondescript dark salamander with small white, gray, or bluish flecks on back or sides. Spots and flecks fewer on back, more numerous on lower sides. Smaller, darker, and more spotted than Jefferson and Silvery salamanders, with narrower snout and shorter legs. Adpressed limbs overlap 1-2 costal folds. Larva is dark brown with yellowish back blotches and a yellow side stripe.

Variation.—Males of this species possess greatly swollen vents during the breeding season. At other times the sexes are difficult to distinguish. Minton (1954) noted that toes of adpressed limbs touch or overlap more frequently in males than in females. The toes of the adpressed limbs touch or overlap by as much as 1 costal fold in specimens under 40 mm. in snout-vent length; toe tips vary from an overlap of one-half costal fold to a separation of as much as 3 folds in specimens over 40 mm. Juveniles are relatively larger headed than adults. None of our specimens can be assigned to the related Ambystoma jeffersonianum. Inclusive of the impressed lines in the axilla and the groin, there are 12-12 costal grooves in four specimens, 13-13 in eight specimens, and 14—14 in one specimen. Vomerine teeth are usually in 4 series, but sometimes the median pair is fused. Vomerine tooth counts for four specimens range from 27 to 39, averaging 32. Maxillary and premaxillary tooth counts for five specimens range from 76 to 101, averaging 85. Nine of the 14 specimens at hand have discrete light flecks on the sides of their tails as well as on their venters. The tail length ranges from 40.4 to 49.5, averaging 46.5, per cent of the snout-vent length.

Natural History: Adults occur under logs and other cover during much of year. Diet includes beetles, centipedes, slugs, worms, and other invertebrates. Reproductive biology similar to Jefferson salamander except that A. laterale breeds in more open sites and females attach their small (1.5-1.7 mm diameter) eggs singly or in masses of up to 4 on edges of leaves and other debris on pond bottom; sometimes eggs are scattered. 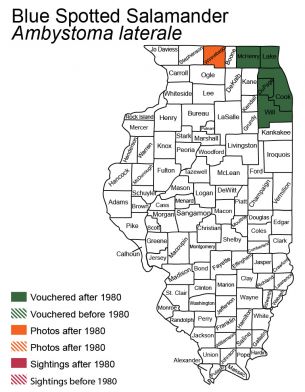 Distribition Notes: In Illinois, the Blue-spotted Salamander is known only from the Northeastern Morainal Natural Division.

Status: Greatest threat is urban sprawl. Locally abundant in relatively undisturbed areas of its range. Listed as a Species in Greatest Need of Conservation in the Illinois Wildlife Action Plan.

Etymology: Ambystoma – amblys (Greek) for blunt; -stoma (Greek) meaning mouth; or anabystoma (New Latin) meaning ‘to cram into the mouth’; laterale – lateralis (Latin) for ‘of the side’.

Original Description: Hallowell, E. 1856.  Descriptions of several species of Urodela, with remarks on the geographical distribution of the caducibranchiate division of these animals and their classification.  Proceedings of the Academy of Natural Sciences, Philadelphia.  8:6-11.