Similar Species: The five-lined skink (Plestiodon fasciatus) has seven supralabial scales and two postlabial scales. The only reliable way to distinguish between the two species is by counting labial scales. This usually requires a hand lens. See Key to Illinois Lizards for help with identification.

Subspecies: None are recognized. 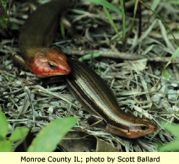 Description (adapted from Smith, 1961): A large skink (largest Illinois specimen 260 mm in total length), with 26 to 30 smooth, subequal scales around mid-body; 50 to 54 dorsal scales between the occiput and a point above the hind legs; frontal scale rectangular; pattern of 5 longitudinal light stripes on dark background, except in sexually mature males, which are tan, gray, or bronze, with red or orange jowls (individual in background, upper left figure; upper center figure); juveniles and subadults with blue tails; two postmental scales and a postnasal scale on each side of head; usually 7 + 7 supralabials and 2 + 2 subequal postlabials. 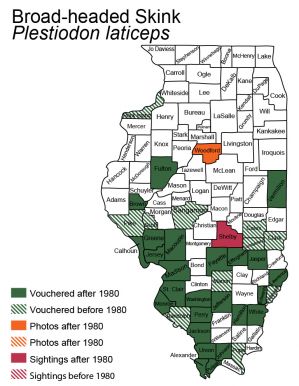 Habitat: Open forests and around barns and outbuildings near forest edge.

Natural History: One of the most arboreal lizards in Illinois. Adults usually climb high into the nearest tree when disturbed. Mating occurs in May with eggs laid from late June to July. Five to 20 eggs are laid in sawdust piles, under fallen logs, and under leaf litter. Females usually remain with the eggs until hatching. Hatchlings range in size from 6 to 8 cm TL. Arthropods are the main prey. Predators include birds of prey and small mammals.

Status: Locally common in the southern third of the state.

Nomenclatural History/ Recent Changes: P. laticeps, P. fasciatus, and P. inexpectatus were lumped together as one species for much of the early history of herpetology in North America. Taylor (1933. Univ. Kansas Sci. Bull. 20:263-271) finally settled the confusion, but much of the early literature on these three species is muddled. Therefore, other names that could be applicable to P. laticeps in the older Illinois literature include Linnaeus’ Lacerta quinquelineata and its subsequent generic transfers, Eumeces quinquelineatus, Plestiodon quinquelineatum, and P. fasciatus (Linnaeus, 1766).  This is illustrated by the use of “(?part)” in the synonomy of Smith (1961, Illinois Natural History Survey Bulletin 28. Article 1.  Pp. 1-298). The genus Plestiodon was resurrected for all North American species north of Mexico to replace Eumeces after evidence showed a lack of support for the monophyly of Eumeces (Brandley, et al., 2005, Systematic Biology. 54 (3): 373-390; Smith, H. 2005. Plestiodon: a replacement name for most members of the genus Eumeces in North America. Journal of Kansas Herpetology. 14: 15-16).