Description: A medium-sized (up to 20 cm TL) lizard. Color and pattern depend on age and sex. Juvenile and subadult have a dark back with five longitudinal light lines and a blue tail. Adult female is similar but tail is not blue. Adult male loses stripes with age, eventually becoming uniform olive or brown. Jaws of male become swollen and orange to red during breeding.

Natural History: Mating occurs in May with eggs laid from late June to July. Two to 18 eggs are laid in sawdust piles, under fallen logs, and under leaf litter. Female usually remains with eggs until hatching. Hatchlings range from 6 to 7 cm TL. Arthropods are the main prey. Predators include birds of prey and small mammals. 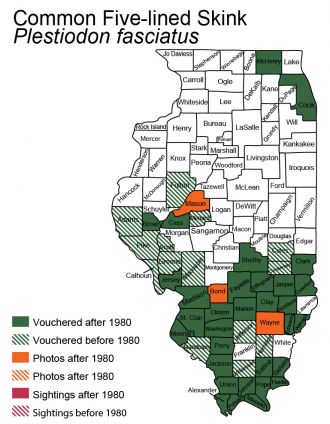 Distribution Notes: This species is rare north of the southern extent of the Wisconsin glaciation, but recent (2011) specimens are known from extreme SW Cook County, and one specimen was taken in 1996 in McHenry County.  Cope (1900. U.S. Natl. Mus. Rep. for 1898) reported a specimen (USNM 9418) from Lake County, but I have not examined it.

Status: Locally common in the southern third of the state.

Nomenclatural History: P. laticeps, P. fasciatus, and P. inexpectatus were lumped together as one species for much of the early history of herpetology in North America. Taylor (1933. Univ. Kansas Sci. Bull. 20:263-271) finally settled the confusion, but much of the early literature on these three species is muddled. Therefore, other names that could be applicable to P. fasciatus in the older Illinois literature include Linnaeus’ Lacerta quinquelineata and its subsequent generic transfers, Eumeces quinquelineatus, Plestiodon quinquelineatum, and P. laticeps (Schneider, 1801).  The genus Plestiodon was resurrected for all North American species north of Mexico to replace Eumeces after evidence showed a lack of support for the monophyly of Eumeces (Brandley, et al., 2005,Systematic Biology. 54 (3): 373-390; Smith, H. 2005. Plestiodon: a replacement name for most members of the genus Eumeces in North America. Journal of Kansas Herpetology. 14: 15-16).