Description: Medium-sized (up to 100 cm TL) dark brown or black snake with a yellow or gray midback stripe and a yellow stripe on each side. Belly gray-green with dark spots on edges of most belly scales. Head usually without parietal light spots. Some individuals have red coloring between side scales. In the Chicago region, the side stripe near the head is broken into a dashed line by black crossbars (Chicago Gartersnake, T. s. semifasciatus). 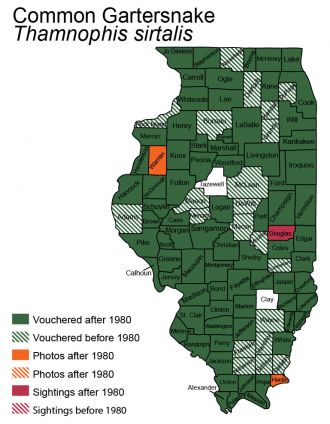 Natural History: Cold-tolerant snake that occasionally emerges from hibernation to bask on warm winter days. Mates immediately after emerging from hibernation, as early as March in southern counties. Females give birth to 15-80 young from July through early October that are 15-20 cm TL. Diet includes fish, amphibians, young birds, and a variety of invertebrates. Eaten by a wide variety of predatory vertebrates; people needlessly kill many.

Status: Common throughout the state.

Nomenclatural History: Like most of the gartersnakes, this species has a very complicated nomenclatural history.  It was transferred to the genus Eutainia, which is how Kennicott (1855) listed it.  Davis & Rice (1883) used Eutaenia.