Description: Large (up to 135 cm TL), stout-bodied venomous snake. Back yellowish brown or rusty brown with 10-20 reddish brown hourglass-shaped, dark-margined crossbands that are narrow across the back and wider on the sides. Belly yellow to brown with brown blotches near the edges. Top of head red-brown. Thin dark line extends from eye to angle of jaw. The sulfur yellow tail tip of newborn darkens with maturity.

Natural History: This shy snake is active April through October. Often seen around old, abandoned buildings where it feeds on rodents. Mates in April and May or September and October. Three to 10 young, 20-25 cm TL, are born in late August or early September. Predators include other snakes, birds of prey, and medium-sized mammals. 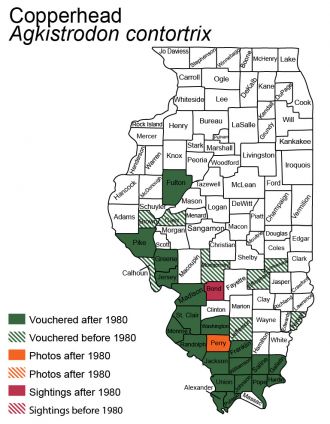 Distribution Notes:  The Fulton County record is USNM 15531 collected 14 August 1889 by W.S. Strode at Bernadotte, IL.  I have not examined the specimen. The Massac County record, illustrated above, was inadvertently omitted from the map at left.

Status: Although probably reduced by habitat destruction and wanton killing by people, it remains locally abundant in the Shawnee Hills and the bluffs along the southern Mississippi River.

Type Specimen: Not designated for either contortrix or mokasen.

Type Locality: “Carolina” for contortrix. Not stated for mokasen.

Nomenclatural History: Smith (1961) used the spelling mokeson and attributed it to Daudin, 1803, which is incorrect.  Davis & Rice (1883) spelled the genus Ancistrodon.