Key Characters: Large head; mottled upper jaws; distinctively humped lower back when at rest; dark spots on back crowded together and encircled by light borders.

Similar Species: No other Illinois leopard frog has a dorsal pattern of multiple dark spots encircled by light borders and the humped back. See Key to Illinois Frogs & Toads for help with identification.

Description: Large (6.6-11 cm SVL) spotted frog with dorsolateral fold along each side of body. Entire belly unspotted white. Snout cone-shaped. Male has paired vocal pouches, at corners of jaw, and enlarged thumbs used for holding onto female during amplexus. 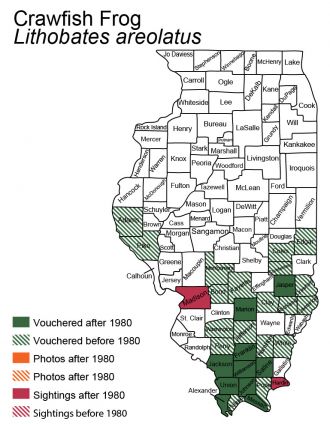 Distribution Notes: Smith (1961) considered the crawfish frog an inhabitant of the “outlier prairies” of southern Illinois. These are the grasslands south of the Shelbyville Moraine underlain with clay soils. However, the populations of the mid-Mississippi Valley occupy a distinctly different habitat as do those of extreme southern Illinois in the Shawnee Hills division and the Mississippi Embayment.

Status: Formerly widespread in southern half of state. Uncommon and declining in some areas where breeding habitats have been drained or stocked with predatory fishes. Listed as a Species in Greatest Need of Conservation in the Illinois Wildlife Action Plan.

Original Description: areolatus: Baird, S.F. & C. Girard. 1852. Characteristics of some new reptiles in the museum of the Smithsonian Institution.  Proceedings of the Academy of Natural Sciences, Philadelphia. 6:173

Nomenclatural History: The Northern Crawfish Frog was originally described as a full species, but was later placed as a subspecies of areolatus.  Illinois populations are currently considered L. a. circulosus.

Frost et al. (2006, Bull. Am. Mus. Nat. Hist., 297: 369) removed areolata (and most other North, Central, and South American ranids) from Rana and placed it in Lithobates based on extensive DNA sequence data, but not all workers agree with this arrangement because of the instability this brings to well-known taxa such as Rana catesbeiana. AmphibiaWeb recommends using Rana (Lithobates) areolata to demonstrate that it is a member of the subgenus Lithobates while preserving long-standing taxonomy.