Subspecies: None are currently recognized.

Description: Large (up to 135 cm TL), stout yellow or light green snake with 25 – 37 dark Y-shaped side markings that meet on the back to enclose a series of light diamonds down the middle of the back. Pattern brightest in juveniles, obscured in some large adults. Belly yellow with dark spots or half-moons that are most numerous toward the tail. Male has conspicuous papillae under the chin. 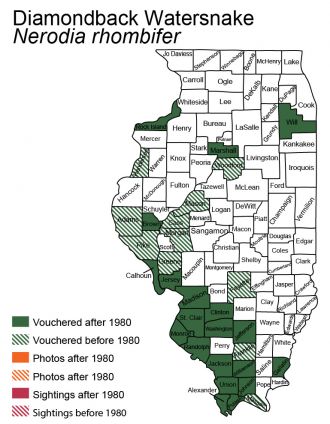 Natural History: One of the largest and most pugnacious snakes in Illinois, it bites and defecates repeatedly when handled. Often basks on limbs overhanging water. Active February through September, it hibernates in beaver lodges, muskrat burrows, and mud bottoms. Mates in late April or May and gives birth to 20 or more young from late August through mid-October. Newborn 25-27 cm TL. Diet consists mainly of fish, but frogs are eaten as well. Predators include other snakes and large shore birds. Large numbers are killed by people who mistake them for cottonmouths.

Type Locality: “the Arkansas River and its tributaries near the northern boundary of the Creek Nation”.