Subspecies: None recognized, but see Nomenclatural History below.

Description: Large (up to 125 cm TL) glossy black snake with white dot in the center of each scale. In the southern third of Illinois the small light dots form 40 – 50 narrow cross-bands with intervening scales lacking dots.

Natural History: Mates in spring and lays 8-12 eggs in June in rotting logs or tree stumps. Young hatch in August or early September at 20-30 cm TL. Like many snakes, it is largely nocturnal during summer and more active during the day in spring and autumn. Slow and deliberate in its movements, this is a constricting predator of other reptiles, especially snakes (even venomous ones), lizards and their eggs, birds, and small mammals. Main predators of juveniles are other snakes; main predators of adults are hawks, raccoons, skunks, and opossums. 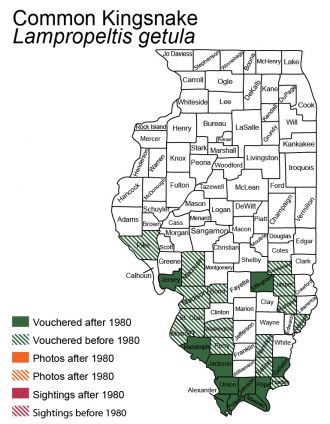 Status: Locally common in the Shawnee Hills and along the southern Mississippi River bluffs.

Original Description: Yarrow,H.C. 1882. Description of new species of reptiles and amphibians in the US National Museum. Proc. US Natl. Mus. 5: 438-443.