Subspecies: Two subspecies are currently recognized, Eastern Box Turtle, T. c. carolina and Three-toed Box Turtle, T. c. triunguis (Agassiz, 1857). Although the Mississippi River has been the presumed barrier separating the two subspecies (carolina on the east side), specimens that are unquestionably tringuis (three toes and little patterning) have been found along the Illinois side of the Mississippi River. Smith (1961) considered the possibility that these may be waifs or represent intergradation between the two subspecies. Tucker & Hatcher (1994. Trans. Ill. State Acad. Sci. 87(3&4):201-206) reviewed the occurrence of triunguis specimens from western Illinois and proposed that the subspecies be added to the list of herpetofauna of Illinois.

Description: Small (up to 15 cm CL) turtle with highly variable carapace pattern of yellow or orange markings on dark background. Plastron tan or brown. Well-developed plastral hinge separates pectoral and abdominal scutes and allows shell to be closed completely. Male differs from female by having concave plastron and red rather than brown eyes. Carapace of hatchling round, brown, with pronounced keel and one yellow spot on each pleural and vertebral scute; plastron with dark central figure bordered by yellow. 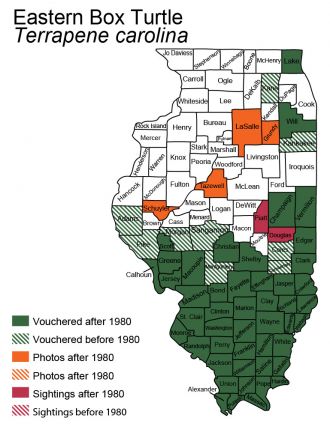 Status: Introduced by humans in urban areas throughout the state. Regularly seen in intact forests of southern half of state.

Nomenclatural History: Davis & Rice (1883. List of Batrachia and Reptilia of Illinois. Bulletin of the Chicago Academy of Sciences. vol. 1, no. 3) used the junior synonym Testudo clausa Gmelin, 1789.  The generic names Cistuda and Cistudo have also been used.