Sceloporus undulatus (Bosc and Daudin in Sonnini and Latreille, 1801)

Subspecies:  None are currently recognized, but in the past, several were. The Northern Fence Lizard, S. u. hyacinthinus (Green, 1818. J. Acad. Nat. Sci. Philadelphia 1: 348-359) was the subspecies formerly recognized in Illinois.

Description: A medium-sized (up to 19 cm TL), stout lizard with gray to brown back sporting 5 to 8 dark bands. Belly white with varying amounts of blue or greenish blue along ventral edges. Blue patch on throat. The colored areas on the throat and sides of body are more brilliant in breeding males.

Natural History: Mating occurs in April or May. Five to 15 eggs are laid in soil and rotting logs and under surface debris in June, July, or early August. Hatchlings (ca. 4 to 5 cm TL) are usually first seen in late August. The main food items are insects, but other invertebrates are also eaten. Predators include snakes and birds. 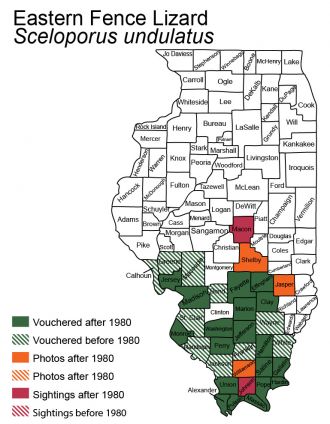 Status: Locally abundant, especially in the southern third of the state.

Nomenclatural History: Aside from the several subspecies formerly recognized, this species has one other junior synonym, Lacerta fasciata Green, 1818 (op. cit.).  Illinois populations were at one time referred to as Sceloporus undulatus fasciatus and S. u. hyacinthinus.