Subspecies: None are currently recognized, but see Nomenclatural History below.

Description: Large (up to 130 cm TL) snake with copper-colored head distinctly wider than neck. Back yellow to bronze with 34-42 reddish brown blotches and an alternating row of brown spots along each side. Belly yellow and boldly marked with black. Hatchling and juvenile resemble adult except for having gray ground coloring and black or dark chestnut blotches.

Habitat: Variety of open and former prairie habitats, including intensively cultivated fields and pastures, in the northern half of the state.

Natural History: A diurnal constrictor that, like many other snakes, often vibrates its tail when threatened. Active early spring through late autumn, even on warm winter days when drawn from its underground hibernation. Mates from June to early July and lays 8-27 eggs about 30 days later. Young (ca. 23-30 cm TL) hatch in late August or September. Diet includes small mammals, birds, their eggs, and nestlings. Main predators are carnivorous mammals and raptors. 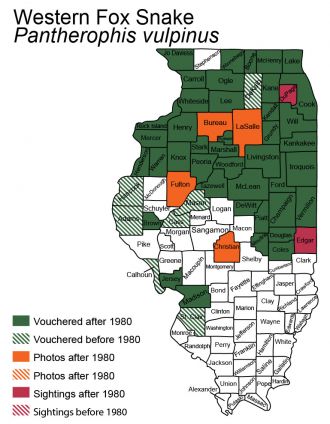