Natural History: Omnivorous, forages along bottom in shallows for mollusks, crustaceans, insects, and plants. Lays 2 – 5 ellipsoidal (ca. 30 x 17 mm), brittle-shelled eggs in and under debris or in burrows excavated using the front and hind limbs. Frequently found moving on land. Skorepa & Ozment (1968. Trans. Illinois St. Acad. Sci. 61:247-251) studied two populations of K. subrubrum in Massac County over five years and found that the turtles burrowed into the mud in the bottom of drying wetlands as the water receded. 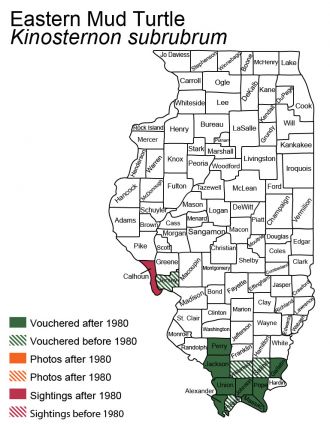 Distribution Notes: Two records are not plotted here; Garman’s record for Peoria (Peoria County) from his “A synopsis of the reptiles and amphibians of Illinois” (1892. Illinois Laboratory of Natural History Bulletin 3(13):215-388) and Hay’s record for Mt. Carmel (Wabash County) from his “A preliminary catalogue of the Amphibia and Reptilia of the state of Indiana” (1887. Cincinnati Soc. Nat. Hist. Jour. 10(2):59-69). Neither record is supported by specimens. Smith (1961) discussed these records and provisionally accepted them based on the fact that “a recently collected specimen from Calhoun County is available, and a colony of K. subrubrum is well known in northern Indiana”. I have failed to locate the Calhoun County specimen. However, there is a specimen in the collection of Principia College (Elsah, IL) from Jersey County. This specimen (PC 404) was originally catalogued as K. flavescens, but was later identified as K. subrubrum by John Tucker. This allows the possibility that the Calhoun and Jersey county specimens are valid, but likely transients and no established populations occur in the middle Mississippi of Illinois.

Status: Uncommon. Drainage of woodland ponds and wetlands in the southern tip of the state constitutes an important threat. Listed as a Species in Greatest Need of Conservation in the Illinois Wildlife Action Plan.

Nomenclatural History: Originally described by Lacepede as Testudo subrubra in 1788 (Histoire Naturelle des Quadrupèdes Ovipares), but that work was considered non-binomial (and thus unavailable) by the ICZN. H. Garman (1892. A synopsis of the reptiles and amphibians of Illinois. Illinois Laboratory of Natural History Bulletin 3(13):215-388) was the first to include this species in the Illinois herpetofauna under the junior synonym Cinosternum pennsylvanicum (Gmelin, 1789).