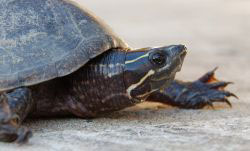 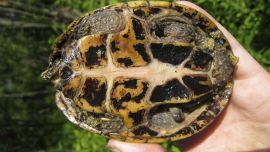 Description: Small (up to 13 cm CL) turtle with unpatterned, light brown to black carapace. Plastron light brown to yellow. Two light stripes on side of head (fade in old individuals). Barbels on chin and throat. Shell steeply peaked with prominent keel in young, becoming more rounded (with less obvious keel) with age. Male differs from female by having a large, swollen tail tipped with a claw, a divided patch of rough scales behind the knee, and greater amounts of soft tissue between plastral scutes.

Natural History: Bottom dweller that sometimes emerges onto logs or climbs shoreline bushes to surprising heights to bask. Foods include plants, mollusks, insects, and worms (often from a fisherman’s hook). Lays 4 to 5 elliptical (ca. 27 x 15 mm), brittle-shelled eggs up to three times during the May to July nesting season. Glands near the bridge of the shell produce foul-smelling secretions. 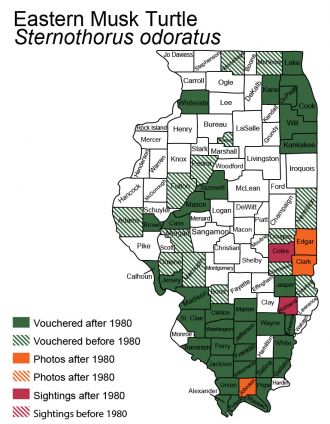 Distribution Notes: Smith (1961) stated: “The stinkpot undoubtedly occurs in every Illinois county” and “Usually special efforts must be made to find this turtle in the mud of bodies of water”.  While the range of the species in many field guides includes all of Illinois, I am not convinced that it occurs statewide at present. It has not been encountered in the heavily agricultural Grand Prairie division, despite much effort. It is also absent or spotty in extreme western Illinois north of the Illinois River.

Status: Particularly common in the southern third of Illinois.

Nomenclatural History: Both the Davis & Rice list (1883. List of Batrachia and Reptilia of Illinois. Bulletin of the Chicago Academy of Sciences. vol. 1, no. 3) and Garman’s list (1892. A synopsis of the reptiles and amphibians of Illinois. Illinois Laboratory of Natural History Bulletin 3(13):215-388) used the name Aromochelys odoratus.  Weed (1923. Notes on reptiles and batrachians of central Illinois. Copeia 116:45-50) listed this species as Kinosternon odoratum. Smith (1961) spelled the genus as Sternothaerus.