Description: A dark, slender salamander (up to 11 cm TL) with straight-edged reddish stripe on back. Belly mottled or dotted black and white but never has orange marks around bases of front legs. Costal grooves 18-20. Legs small and short, toes of adpressed limbs separated by 4-9 costal folds. Some proportion of individuals (up to 97% in Crawford County, but averaging less than 35% elsewhere) lack the back stripe and are uniformly dark gray to black (lead phase).

Natural History: Completely terrestrial with no larval stage. Feeds on worms, small insects, and other arthropods. Eight to ten yellowish eggs are laid in a cluster under rocks, in rotten logs and tree stumps, or under moss or tree bark. Female guards eggs until they hatch into tiny juveniles in late summer. Hatchling may have a yolk sac and tiny gills for a day or two. 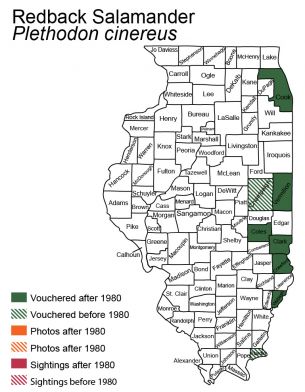 Nomenclatural History: Originally described in the genus Salamandra, placed in the genus Plethodon by Tschudi (1838, Classif. Batr.: 92). Other names that have been used for this species in the Illinois literature include Salamandra erythronota Rafinesque, 1818 (Sci. J., New York, 1: 25) and other combinations; Plethodon erythronotus, P. e. cinerea, P. e. erythronota.