Subspecies: Four subspecies are currently recognized, but only the Common Ribbonsnake, T. s. sauritus is known to inhabit Illinois.

Description: Medium-sized (up to 80 cm TL), slender black snake with a yellow midback stripe and a yellow stripe on each side. A brown stripe on scale rows 1-2 extends onto the sides of belly scales. Remainder of belly plain greenish white. Two rows of black spots between back and side stripes. Long tail about one-third body length.

Habitat: Lowland forests, in vegetation along banks of sloughs, cypress-tupelo swamps, and other similar bodies of water.

Natural History: A quick, wary snake that moves to water, shoreline vegetation, or holes in the soil when disturbed. Mates in April or May and gives birth to 10-15 young between July and October. Amphibians make up most of the diet, but fish and invertebrates also eaten. Predators include wading birds, mammals, and other snakes. 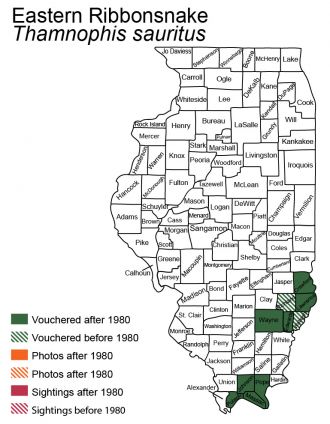 Status: Endangered in Illinois. Threats include drainage of swamplands and loss of aquatic and riparian vegetation. Known only from southeastern counties.

Nomenclatural History: This species has a very complicated nomenclatural history. It was transferred to the genus Eutainia by Baird & Girard (1853), but Kennicott emended the name to Eutania and named E. sackenii, which was later placed in synonymy of sauritus. Davis & Rice (1883) used Eutaenia for the Eastern Ribbonsnake as Eutaenia saurita.