Similar Species: American Toad and Fowler’s Toad are squat and plump, but do not have the vertical pupil. See Key to Illinois Frogs & Toads for help with identification.

Natural History: An insectivorous species that spends much of life underground, where it burrows rearfirst using spades on hind feet. Nocturnal when above ground. Most often seen at breeding site, during field plowing, under logs and rocks, or on roads after heavy rain. Explosive breeder producing noisy choruses for brief periods following heavy rain from April to September. Breeding call is a series of low-pitched explosive groans. Reproduction adapted to ephemeral waters; eggs hatch in a few days and tadpoles transform in 2-3 weeks. 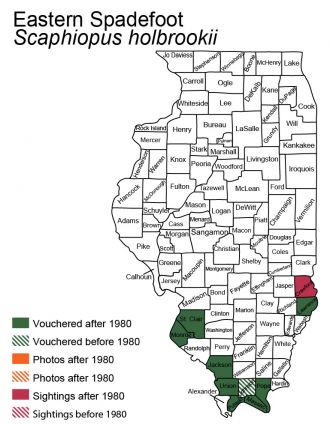 Status: Because of its secretive nature and burrowing habits, its status is unknown.

Type Specimen: Listed as ANSP in Harlan, but not known to exist.

Nomenclatural History: At one time two subspecies were recognized, with the nominal subspecies in Illinois.