Description: Diminutive (up to 20 cm TL) plain tan or yellow-brown snake with pointed head. Belly bright salmon or orange in the middle, becoming white toward the sides. 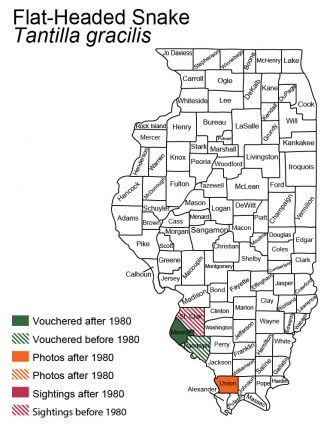 Natural History: Probably nocturnal and found mostly in spring and autumn under rocks, logs, and other moist debris in forest or brushy slopes. Burrows deeply as surface soil dries in summer. Sometimes found on or along roads at bottoms of rocky hillsides. Mates in April and May and deposits 2-4 eggs in moist soil or under rocks during June. Young hatch in September at 7-0 cm TL. Eats scorpions, spiders, centipedes, and a variety of other small arthropods, which it probably tracks by scent. Two small, grooved rear fangs and small venom glands are apparently used in subduing prey, but the snake is no threat to human beings and does not bite when handled. Preyed upon by birds, small mammals, lizards, and other snakes.

Status: Threatened in Illinois. Rare and localized along the southern Mississippi River bluffs.