Key Characters: 4 rather than 5 toes on hind feet; circular constriction at base of tail.

Description: A small (up to 10 cm TL), slender, reddish brown salamander with a black-spotted ivory-white belly. Costal grooves extend to midline of back. Snout distinctly pale brown. Some individuals have a broad pale brown stripe down midback. Tail breaks off easily.

Natural History: Terrestrial adults occupy moist, rotten logs and feed on a variety of arthropods on forest floor. Mating occurs in autumn, before hibernation. During April – May, female broods 20-60 moderately large (2.5-3 mm diameter) eggs laid in a cavity a few inches above water within mats of moss or leaves, within logs, under rocks, or along spring-fed streams or pools. Within two months, hatchlings fall or wriggle into water where they develop into high-finned aquatic larvae. 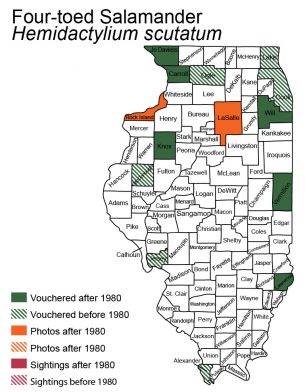 Distribution Notes: Since the publication of Smith (1961), almost a dozen new locations have been documented for H. scutatum, and they have been throughout the state. More populations are likely to be discovered.

Status: Threatened in Illinois. A few scattered localities are relics of post-glacial times when range was more continuous and northern forests covered much of Illinois. Populations in Cook and Lake counties probably extirpated by habitat destruction.