Similar Species: American Toad has one or two warts in each dark dorsal spot and a darkly colored venter, Eastern Spadefoot has no cranial crest and has vertical pupils. See Key to Illinois Frogs & Toads for help with identification.

Description: Medium-sized (up to 8 cm SVL), gray to greenish gray toad with large dark back spots roughly in pairs flanking light mid-back stripe. Chest and belly white or gray; dark pigment, if any, limited to small spot on chest. Transverse cranial crest in broad contact with parotoid gland. Hybrids with A. americanus have intermediate features.

Habitat: A wide variety of habitats where flooded fields, ditches, and other bodies of water are available for reproduction.

Natural History: Adults are active on the surface day and night. Diet consists of insects, earthworms, and other invertebrates. Breeding takes place from late April to late June. The male breeding call, a short “waaaa,” is heard from shallows of ponds and lakes and flooded ditches. Eggs are laid in long strings. Eggs and tadpoles are similar to those of American toad. Embryos hatch in a week and transform from June through July. 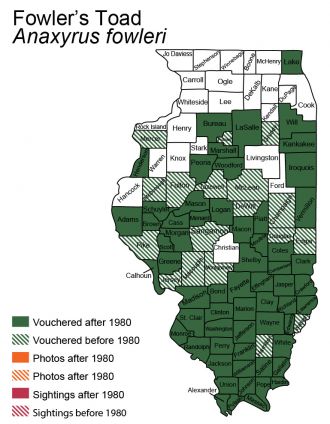 Original Description: Hinckley, M. H. 1882. On some differences in the mouth structure of tadpoles of the anourous batrachians found in Milton, Mass. Proceedings of the Boston Society of Natural History 21: 307–314.