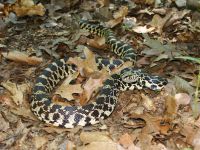 Subspecies: Six subspecies are currently recognized. The Bullsnake, P. c. sayi  (Schlegel, 1837) is the only one thought to inhabit Illinois.

Description: Large (up to 180 cm TL), stout snake with a disproportionately small head. Back yellow to tan with 36-54 black (anterior and posterior) and brown (midbody) blotches that alternate with two rows of dark spots on each side. Tail marked with 8-15 black rings that contrast sharply with yellow-and-black-checkered belly. Juvenile resembles adult except that its back is tanner and back blotches are usually all black.

Natural History: Climbs and burrows readily. Well known for its defensive display, which includes tail vibrating, loud hissing, and repeated lunging with the mouth partially open. Mates in April or May and lays about 10 eggs in June, usually in burrows excavated by the female. Communal nesting is common, so large clutches may be from more than one female. Young hatch in August or September at 20-25 cm TL. Its appetite for small rodents makes this snake a friend of farmers. Birds of prey are the likely predators, but many adults are killed by unenlightened people and on roads by vehicles. 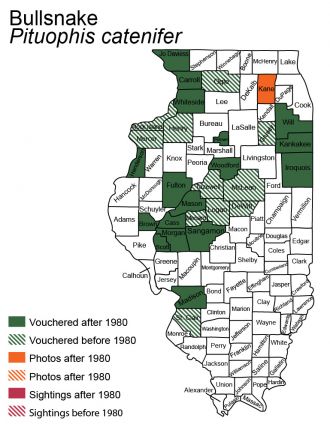 Status: Locally common in the extensive sand prairies of central and northwestern counties.

Type Specimen: Holotype. MNHN 57.  For sayi, not known to exist.