Subspecies: None recognized, but see Nomenclatural History below.

Description: Large (up to 175 cm TL), dark snake with a highly variable pattern that ranges from a series of light blotches to completely black. The ground color between blotches darkens with age, obscuring most of them by 80 cm TL, except in extreme southern counties where remnants of the juvenile pattern are retained throughout life. Belly black-and-white-checkered. Adults have white, orange, or red skin between the dark scales.

Natural History: This arboreal constrictor often suns and prowls on tree limbs and rock outcrops where it feeds on birds, their eggs, and small mammals. Mates in April or June and l0-20 eggs between early May and July. Young (ca. 30-35 cm TL) hatch late July to September. Large adults have few predators other than humans. Carnivorous mammals and raptors are the main predators of juveniles. 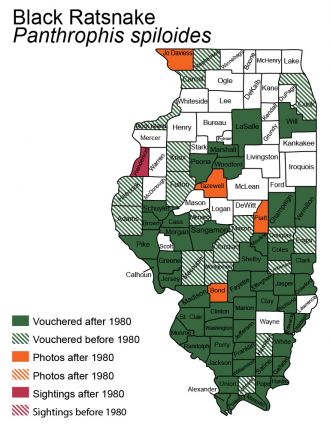