Key Characters: Well-developed fold around rear of tympanum extends middle way down the back; toes webbed about halfway to tips.

Similar Species: American Bullfrog lacks the dorsolateral folds down the back.  All other Illinois leopard frogs have a dorsal pattern of spots or blotches, except the Wood Frog which has a dark mask through the eye. See Key to Illinois Frogs & Toads for help with identification.

Subspecies: Smith (1961) recognized two subspecies in Illinois; Green Frog, R. c. melanota; and intergrades between the green frog and the bronze frog, R. c. clamitans.  The latter were restricted to extreme southwestern tip of the state.  Subspecies are not currently recognized.

Habitat: A variety of shallow, weedy, aquatic habitats around lakes, ponds, and streams in wooded areas. In southern counties, where rock outcrops are abundant, it often is associated with small spring-fed streams. 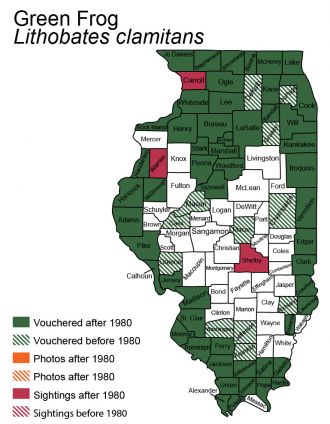 Distribution Notes: The Macon County record is based on one specimen collected in 1961. I have not examined this specimen, but the location indicated would put it near a spring run and I am inclined to believe the authority of the collector. The Shelby County observations are mine, although no specimens could be captured.

Frost et al. (2006, Bull. Am. Mus. Nat. Hist., 297: 369) removed clamitans (and most other North, Central, and South American ranids) from Rana and placed it in Lithobates based on extensive DNA sequence data, but not all workers agree with this arrangement because of the instability this brings to well-known taxa such as Rana catesbeiana. AmphibiaWeb recommends using Rana (Lithobates) clamitans to demonstrate that it is a member of the subgenus Lithobates while preserving long-standing taxonomy.