Description (modified from Smith, 1961): A large (up to 44 cm TL), aquatic salamander with a flattened, much wrinkled body; 5 toes on each hind foot, loose folds of skin on each side of the body and posterior margins of legs; 1 gill slit on each side of the throat; dark dorsum and slightly less dark venter often with darker spots and mottling; without external gills. Costal grooves inconspicuous, nearly hidden within skin wrinkles. Occasionally one gill opening is missing. Legs are short and stout. Tail compressed and keeled (adults) or finned (larvae) to the pelvis. Spotted larvae hatch at about 30 mm TL and transform 11-13 cm TL.

Natural History: Adults seldom seen except in clear water or when caught in commercial fishing nets. Adults eat crayfish, small fish, snails, insects, worms, and tadpoles. Reproduction occurs from August into October. Female lays 250-450 eggs in long beaded strings in gravel depressions excavated by male under large submerged rock or log. Male releases sperm over eggs in nest and remains to protect them during development. Slimy skin secretions are toxic and probably repel predatory fish. The only predator of large adults is man. 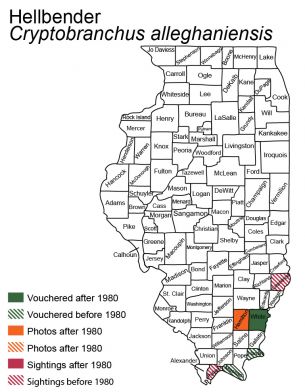 Distribution Notes: The Eastern Hellbender is known in Illinois from only a handful of records in six counties, all in the Wabash or Ohio drainages and all but one prior to 1960. Only two of these records come from inland waters; one from the lower Cache River (Ohio River drainage) near Ullin, Illinois, and one from Skillet Fork Creek (Little Wabash drainage) in Hamilton County.  The latter is represented by a photo from a local newspaper.  The remaining records are from the Wabash and Ohio rivers.  The most recent specimen, from the Wabash River near Maunie, White County, Illinois, in 1989, was caught by a commercial fisherman.

Status: Most former rocky habitat in Illinois has been buried under silt. This not only makes it unsuitable for hellbenders, but makes surveying difficult. Endangered in Illinois.

Nomenclatural History: Although the nomenclature of the Eastern Hellbender has been relatively stable for many years, other names under which it has referred to in Illinois literature include Menopoma allegheniense (Davis & Rice, 1883, Chicago Acad. Sci. Bull. 1(3):25-32). In addition, the question of whether the two subspecies should be elevated to species status is ongoing.