Subspecies: None are recognized.

Natural History: Subterranean adults are seldom seen outside of the breeding season, but may occasionally be found in leaf litter or under logs. Diet includes beetles, centipedes, slugs, worms, and other invertebrates. During February-March rains, adults migrate several hundred meters to congregate and breed in scattered vernal woodland ponds or fish-free permanent ponds. The 180-210 eggs (2-2.5 mm diameter) enclosed within jelly-like masses (usually 14-22 eggs per mass) are attached to twigs and stems in water. Eggs hatch in less than a month and larvae remain in pond 2-3 months where they prey on invertebrates and other amphibian larvae. Predators of adults include skunks, raccoons, and snakes. 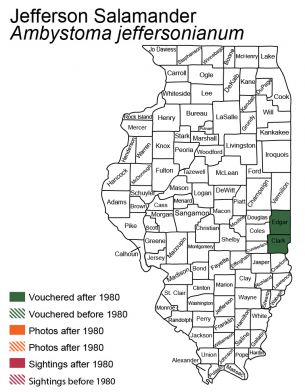 Distribution Notes: First found in Illinois in 1990 at a single pond in Edgar Co., it is now known to occur at several localities in the Wabash Border Natural Division, but is still restricted to Clark and Edgar counties. The Silvery Salamander, A. platineum, is known from Vermilion and Crawford counties, the two counties north and south of Clark and Edgar. Extensive field work has been conducted in these four counties with no syntopy documented.

Original Description: Green, J. 1827. An account of some new species of salamanders.  Contributions of the Maclurean Lyceum 1(1):3-8.