Habitat: Grasslands and urban lots in former prairie, where it is found under rocks, logs, leaves, boards, and other debris.

Natural History: Active March to November, spending less time at the surface during hot summers and more after heavy rains. Mates in late August and 5-10 young are born the following August or September. Newborn are 7-12 cm TL. This secretive and semifossorial nocturnal snake subsists almost entirely on earthworms. Predators include other snakes, birds, and mammals. Often curls its tail into a tight coil when disturbed, but otherwise passive. 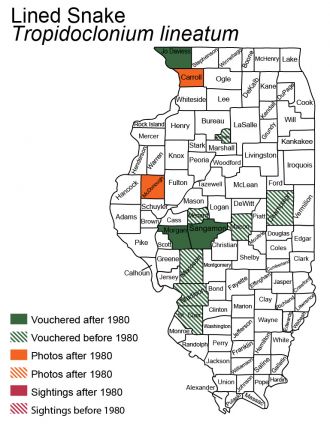 Original Description: Hallowell, E. 1856. Notice of a collection of reptiles from Kansas and Nebraska, presented to the Academy by Dr. Hammond, U.S.A. Proceedings of the Academy of Natural Sciences Philadelphia. 8. 238-253.