Description: Medium-sized (up to 110 cm TL) snake with variable color pattern. The less brightly colored L. t. triangulum has 33-46 brown blotches on the back alternating with 1-2 rows of spots on the side. The brighter L. t. syspila has 19-26 red blotches on the back and 4-8 red rings on the tail.

Habitat: A variety of habitats from rocky, wooded hillsides and glades to old fields and wetlands.

Natural History: Usually found in rotting logs, under bark of stumps, or under logs, rocks, and other surface debris. Mates in spring and lays 8-20 eggs in June in rotting logs, tree stumps, or other rotting vegetation. The young hatch in August or early September at 20-25 cm TL. Diet includes small mammals, birds and bird eggs, reptiles and reptile eggs, frogs, and fish. Predators include birds of prey and mammals, but many more probably are killed on roads by vehicles. 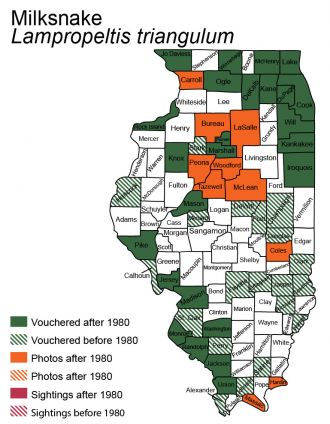 Distribution Notes: Probably occurs statewide, with triangulum in the northern third of the state, syspila in the southern third and an intergrade zone in the middle third.

Status: Not commonly seen, except perhaps in the Chicago region and portions of the Shawnee Hills, because of its secretive nature. Red milk snakes may be over-collected for the pet trade at some localities.