Similar Species: Small-mouthed Salamander has a disproportionately small head for its body, gray flecking on the sides of the body, and 14-16 costal grooves.  See Key to Illinois Salamanders for help with identification.

Description: A stocky, gray to brownish black salamander up to 11 cm TL. Usually conspicuous light and dark stripes on the belly, even of larva. Often a white edge along top of adult tail. Costal grooves 10-11. Larva distinctively marked with mottled throat, pale streak on side of head, dark stripe extending down middle of belly, and pale stripe on lower side. 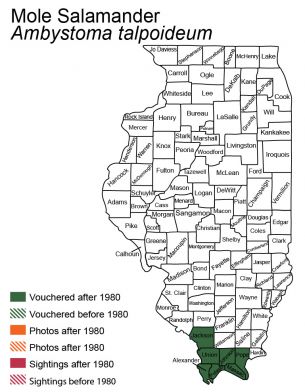 Habitat: Bald cypress and tupelo swamplands, flatwoods sloughs, and nearby ponds of the Cache, Mississippi, and Ohio river valleys at the southern tip of Illinois.

Natural History: Adults move to breeding ponds (vernal pools, fish-free ponds, or swamp edges) for courtship and egg-laying during late autumn and winter rains. Females attach 200-400 small (2 mm diameter) eggs, in jelly-covered clusters of 1-35 each, to twigs and leaves under water. Larvae transform during summer or autumn and, in a few permanent ponds, some large larvae are known to overwinter. Paedomorphic individuals have been documented from Massac County. Adults feed on beetles, centipedes, slugs, worms, and other invertebrates.

Status: This salamander has a small range in the state, and requires wet bottomland and swamp habitat, much of which has been drained and fragmented. It is locally common in some of the remaining habitat fragments protected in state conservation areas and Cypress Creek National Wildlife Refuge. Listed as a Species in Greatest Need of Conservation in the Illinois Wildlife Action Plan.

Etymology: Ambystoma – amblys (Greek) for blunt; -stoma (Greek) meaning mouth; or anabystoma (New Latin) meaning ‘to cram into the mouth’; talpoideum – talpa (Latin) for mole; talpinus (Latin) for ‘of moles’; oides (Latin) for resembling, ‘having the form of’, like.

Type Locality: “sea islands on the borders of South Carolina”