Habitat: Eastern deciduous forests under bark or other debris on ground, especially on hillsides.

Natural History: This completely terrestrial salamander can be found in burrows, under rocks, in and under logs, and in rotten tree stumps in spring and autumn, but disappears deeper into soil during summer and winter. It prowls the forest floor at night feeding on worms and arthropods. Copious, adhesive skin secretions provide protection from predators. Tiny hatchlings, which resemble adults in form and color, grow to become the largest completely terrestrial salamanders in Illinois. Females deposit and brood clusters of 10-20 large white eggs in damp rotten logs, burrows, or rock crevices. Brooding females were observed in rock crevices in a southern Illinois cave during October and November. The embryos hatched by May of the following year. 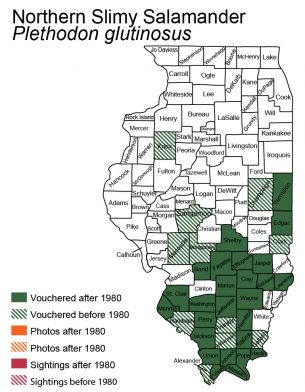 Distribution Notes: Roughly the southern half of Illinois. A record from “Abingdon, Knox County, IL” collected by Garman (no date); CAS-SUA 597, is doubtful as this is well north and west of the NW limits of the species range.

Status: Most commonly encountered woodland salamander in southern half of state.

Type Locality: Not stated. Restricted to Princeton, New Jersey by Dunn (1926, Salamanders of the Family Plethodontidae:138).