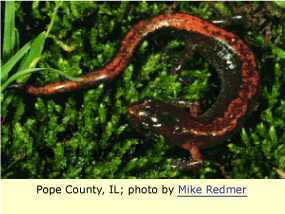 Description (modified from Smith, 1961): A small (up to 11 cm TL), slender, red-backed or uniformly dark salamander similar to the redback salamander, but differing over much of its range in having a strongly lobulated (zigzag rather than straight-edged) red or yellow mid-dorsal band, or a straight-edged mid-dorsal stripe; costal grooves 16-18; 3.5 to 7.5 costal folds between toe tips of adpressed limbs; tail length of adult usually less than snout-vent length; shoulder or interhumeral region pigmented with orange or red; mental gland prominent in male. Black and white belly markings. Striking geographic variation in back stripe that extends from head to tail tip; in southeastern counties, it is a broad reddish (sometimes yellow) zigzag or has wavy edges; in some individuals, it is yellow, gray, or black. In counties bordering the Mississippi River, the back stripe is narrower, nearly straight sided, and either red or absent (lead phase).

Natural History: In late autumn and spring, during rainy periods, it may be abundant under rocks on forested hillsides. During mid-summer, individuals move deeper into soil, sometimes encountering moist cave passages where they accumulate in large numbers. Females have been observed brooding eggs in rock crevices in a southern Illinois cave June through September. 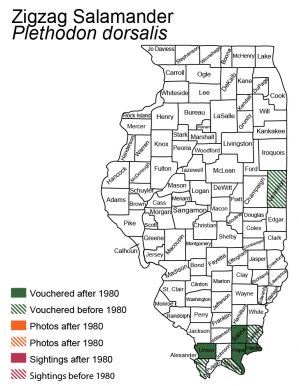 Distribution Notes: Only two specimens are known from Vermilion Co., IL, both in the collection of the University of Illinois Museum of Natural History, and both collected by Alvin Cahn in 1926 from “strip mines near Danville”.  Repeated attempts to find more specimens in this area have failed.  However, the species is known from Parke Co., Indiana, two counties due east.

Nomenclatural History: Originally named as a subspecies of P. cinereus in 1889, workers elevated and sunk this species several times, but no junior synonyms were named, with the exception of Plethodon erythronotus var. dorsalis Baird In Cope, 1869, Proc. Acad. Nat. Sci. Philadelphia, 21: 100, but this was a Nomen nudum*.  It was finally recognized as a full species in 1953.

* Nomen nudum is Latin for “naked name”.  This means that the name was published without an acceptable description.