Key Characters: Two rows of square to rectangular black spots on back between wide dorsolateral folds that extend from eyes to hips; undersides of thighs bright yellow in life.

Similar Species: No other Illinois frog in the genus Lithobates has the dorsal blotches as rectangular and arranged in two rows. See Key to Illinois Frogs & Toads for help with identification.

Subspecies: No subspecies are currently recognized.

Description: Small to medium-sized (4.5-7.0 cm SVL) gray or tan frog with back spots symmetrically arranged and square rather than round. Occasionally, spots fuse to form rectangles or long bars on back. On sides, spots are higher than long and aligned in one row. Belly plain white.

Natural History: Lives in cool, high-quality waters, and can withstand lower temperature than most other species of Lithobates. Adults migrate to clear, cool ponds to mate during April-May and females lay about 2,000 eggs each. Breeding call is a low, snoring sound lasting 1-2 seconds. Tadpoles transform by midsummer. 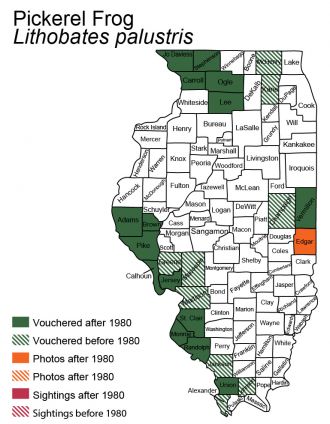 Status: Listed as a Species in Greatest Need of Conservation in the Illinois Wildlife Action Plan.

Original Description: LeConte, J. 1825. Remarks on the American species of the genera Hyla and Rana. Annals of the Lyceum of Natural History of New York. 1(Part 2):278-282.

Type Locality: Not stated [designated as vicinity of Philadelphia, Pennsylvania by Schmidt (1953)]

Nomenclatural History: Frost et al. (2006, Bull. Am. Mus. Nat. Hist., 297: 369) removed palustris (and most other North, Central, and South American ranids) from Rana and placed it in Lithobates based on extensive DNA sequence data, but not all workers agree with this arrangement because of the instability this brings to well-known taxa such as Rana catesbeiana. AmphibiaWeb recommends using Rana (Lithobates) palustris to demonstrate that it is a member of the subgenus Lithobates while preserving long-standing taxonomy.