Subspecies: No subspecies are currently recognized, although as many as four have been in the past. See Nomenclatural History below.

Natural History: Often leaves water to forage for amphibians. Mates in May and June and gives birth to 10-20 young in late July or August. Newborn are 20-28 cm TL. Diet includes fish and amphibians. Predators include other snakes, large shore birds, mink, and raccoons. Often killed by people who mistake it for cottonmouth. 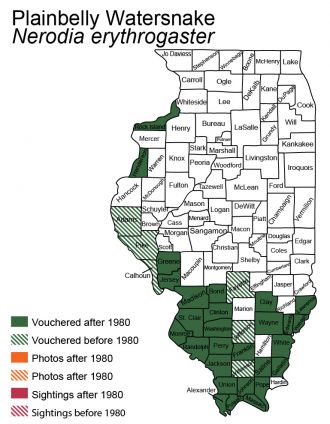 Status: Common in the appropriate habitat. Threats include drainage of wetlands, removal of aquatic vegetation, and loss of aquatic border habitat suitable for amphibians.

Original Description: Forster, 1771. A catalogue of the animals of North America. In J.B. Bossu. Travels through that part of North America formerly called Louisiana. London. Vol. 1:364.