Description: Medium-sized (up to 100 cm TL) dark brown or black snake with an orange-yellow midback strip and a yellow-gray stripe on each side. Two rows of alternating black spots or blotches on the side. Belly gray-green with dark spots along the edges. Usually a pair of light spots on top of the head.

Natural History: One of the most cold-tolerant snakes, often emerging from hibernation to bask on warm, sunny winter days. Mates in April or May and gives birth to 5-30 young from August through early October. Newborn 15-25 cm TL. Does not bite as readily as the common garter snake when handled. Common prey are earthworms, slugs, and small amphibians. Predators include birds of prey, mammals, and other snakes. Large numbers are killed on roads each spring and autumn as they move to and from upland hibernacula. 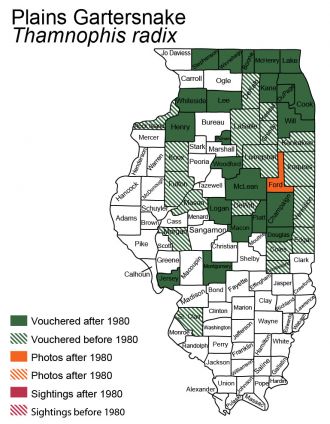 Status: Common in the northern half of the state.

Nomenclatural History: This species has a very complicated nomenclatural history.  Kennicott (1855) emended the name to Eutania, Hay (1881) to Eutaenia and S. Garman (1884) transferred it to Tropidonotus. For a time it was considered a subspecies of Thamnophis ordinatus (but as Tropidonotus ordinatus radix).