Subspecies: Two subspecies are currently recognized, but only the Northern Red-bellied Snake, S. o. occipitomaculata is known to occur in Illinois.

Natural History: Active at ground level (during the day in spring and autumn, during night or twilight hours in summer), under rocks and logs, in rotting logs, and in piles of leaves; occasionally climbs into low shrubs. Emerges from hibernation in soil, gravel, rock crevices, etc., in March (during warm springs) and remains active into November. Mates May to September and 5-25 young (ca. 5-10 cm TL) are born August through early September. Earthworms and slugs make up most of the diet. Predators include snakes, birds, mammals, even large fish and frogs. Large numbers are killed on roads during spring and autumn as they move to and from upland hibernacula. 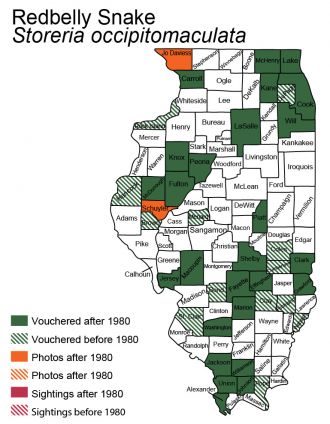 Status: Locally abundant, even in forested moraines of the Chicago region.

Nomenclatural History: Aside from a few spelling variants; occipito–maculata, occipito maculata, the nomenclature of this snake has been stable.