Subspecies: Two subspecies are currently recognized. The Northern Rough Greensnake, O. a. aestivus, is the only subspecies in Illinois.

Description: Slender bright green snake up to 85 cm TL with a white or yellowish white belly. Underside of head is light yellow. Head is large compared with slender neck. Long slender tail is over one-third of TL.

Habitat: Inhabitants of small trees, bushes, and vines, especially near lakes and streams along forest edges.

Natural History: Active by day and sleeps at night perched in bushes and shrubs. Well camouflaged against predators on green branches, and transpiring leaves may reduce rate of cutaneous water loss. Moves quickly when disturbed and may open its dark-lined mouth threateningly, but rarely bites. Mates in spring and lays 4-6 elongated, thin-shelled eggs in June and July in rotting logs and stumps, and under flat rocks and other cover. Young 18-21 cm TL hatch in late August or September. Stalks crickets, caterpillars, grasshoppers, spiders, and other soft arthropods by moving slowly along leaves and branches. Main predators are other snakes, birds, and mammals. 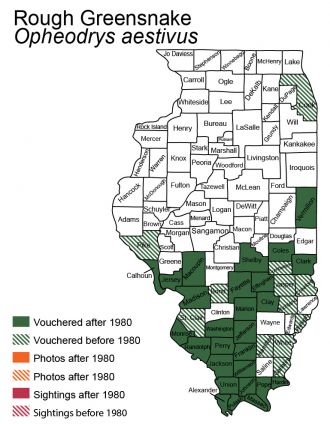 Status: Locally abundant in the southern half of the state. May be reduced in some areas where insecticides are applied.