Similar Species: Milksnake. See the Key to Illinois Snakes for help with identification.

Natural History: Semifossorial snake that spends most daylight hours buried in sand or under leaf litter, rotten logs, rocks, and other cover. In other states, eggs have been found buried in sand and pine needles late June through August. The 2-9 eggs per clutch probably hatch in September. Hatchlings range from 13 to 18 cm TL. Eats reptile eggs, insects, frogs, lizards, snakes, and mice. Main predators are other snakes, birds, and mammals. 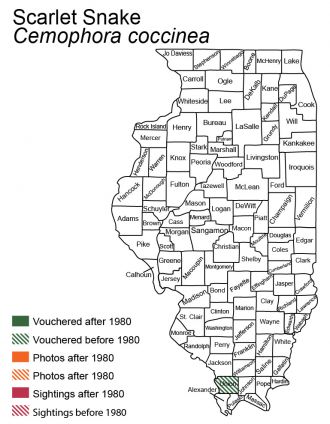 Distribution Notes: Known in Illinois from one specimen collected in 1942 by Fred R. Cagle at Wolf Lake Swamp, Union County, and originally identified as a Red Milksnake. The specimen subsequently was correctly identified by Philip W. Smith, noted herpetologist at the Illinois Natural History Survey. Searches in the vicinity of Wolf Lake and nearby Pine Hills have yielded no additional specimens.

Status: Not listed as endangered because existence in Illinois remains uncertain despite isolated records from Indiana and Missouri.

Nomenclatural History: The Scarletsnake has a complicated nomenclatural history.  It was originally thought that Linnaeus’ Cemophora doliatus referred to Lampropeltis triangulum, but later evidence revealed it was actually based on Cemophora coccinea. For a while after this discovery some workers, including Phil Smith (1961), used the combination Cemophora doliatus to refer to the Scarletsnake until that name was suppressed under the rule of stability.