Description: A long (up to 17 cm TL) salamander with blue lichenlike markings on sides and scattered blue flecks over head, back, limbs, and belly. Juveniles more brightly marked with blue. Costal grooves usually 13 (80%), occasionally 14. Lower jaw does not protrude beyond upper. Silvery salamanders are reliably distinguished from Jefferson Salamanders only by counting chromosomes, measuring the silvery’s larger red blood cells (it is triploid) or molecular markers.

Natural History: Thought to have originated through hybridization and backcrossing between A. laterale and A. jeffersonianum thousands of years ago, this unusual all-female species usually occurs with A. jeffersonianum, from which it must obtain sperm to initiate development of ova.  No genetic contribution is normally made by the sperm.  All known Illinois populations are isolated from A. jeffersonianum by many kilometers and the Small-mouthed Salamander, A. texanum, supplies the sperm. During February and March rains, the subterranean adults migrate to ponds and breed. Jelly-covered masses of 2-50 eggs are attached to sticks or left loose on pond bottom. Mortality of developing embryos is sometimes as high as 80%. Adults feed on beetles, centipedes, slugs, worms, and other invertebrates. 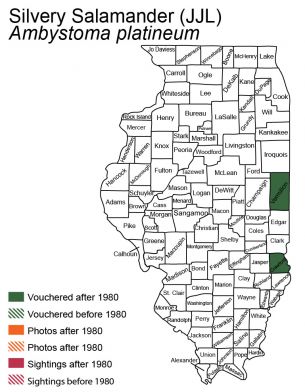 Distribution Notes: Originally known from only one population in Kickapoo State Park, Vermilion County, the Silvery Salamander has recently been found in several more ponds in Vermilion Co., and a few ponds in Crawford County. Interestingly, while A. platineum is known from Vermilion and Crawford counties, A. jeffersonianum is known only from Clark and Edgar counties, the two counties between Vermilion and Crawford. Extensive field work has been conducted in these four counties with no syntopy documented.

Status: Endangered in Illinois. Distribution extremely limited in the state. Only a few natural populations are known.

Original Description: Cope, E.D. 1867. A review of the species of the Amblystomatidae. Proceedings of the Academy of Natural Sciences Philadelphia. 19:166-211.

Nomenclatural History: Cope described Ambystom platineum many years before Uzzell (1964, Copeia, 1964: 257-300) discovered that it is a triploid, all female (=unisexual) species (see “Natural History”, above).  Cope distinguished A. platineum from the morphologically similar (but sexual) species, A. jeffersonianum, based on the relatively narrower snout of A. platineum.  Cope (1875, Bull. U.S. Natl. Mus., 1: 26) then relegated platineum to a subspecies of A. jeffersonianum.  Uzzell (1964, Copeia, 1964: 257-300) elevated platineum to species status after he discovered the unisexual nature of the species, but also pointed out (1967, Catalogue of American Amphibians and Reptiles, 49.1- 49.2) that the application of this name was a matter of convenience as it is not possible to determine if either of Cope’s syntypes of A. platineum were unisexual triploids or the morphologically similar A. jeffersonianum.  The narrower snout of Cope’s syntypes and the fact that A. platineum are known from near the type locality (Cleavland, OH) of A. platineum does suggest that his syntypes were A. platineum.  Lowcock, et al., (1987, Syst. Zool., 36: 328-336) considered A. platineum as part of a hybrid swarm of a Ambystoma laterale x Ambystoma jeffersonianum and not a unitary lineage, but Spolsky et al., (1992. Evolution 46(6):1935-1944) argued that:

“Although 18 distinctive hybrid genomic combinations have been noted in the genus Ambystoma (Vrijenhoek et al., 1989), few of them form standing populations; most of them, therefore, almost certainly make no contribution to on-going lineages. Such sporadic individuals, which constitute “hybrids as such” for the purposes of the International Code of Zoological Nomenclature, are best identified by genome-based labels. In contrast, we use specific names for the unisexual triploid Ambystoma known to form on-going clonal lineages.”

None of the populations known in Illinois to date are syntopic with the sexual species, A. jeffersonianum, and therefore there is no possibility of hybridization with that species.