Similar Species: Five-lined Skink, but it does not have large rectangular scales on belly. See Key to Illinois Lizards for help with identification.

Description: A long (up to 20 cm TL), slender lizard with olive to brown back with six longitudinal stripes that may be white, light gray, yellow, or blue. Most stripes extend to the base of the tail. Belly is white and in male may be washed with blue. Juvenile is similar to adult but has a light blue tail.

Natural History: This alert and quick lizard is difficult to capture. Mating takes place in the spring and 3-5 eggs are laid from early June to July. Hatching takes place in early August. Hatchlings average 3 cm TL. Prey include insects and snails. The main predators are snakes. 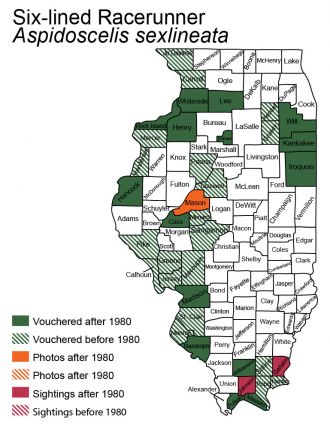 Status: Rare in the northern hill prairies but common in other parts of its range, especially the Shawnee Hills.

Nomenclatural History: Lacerta fallax, Merrem, 1820 is a junior synonym. Other names it has been known by include Seps sexlineata. Reeder et al. (2002, Am. Mus. Novit. 3365: 1–61) transferred all of the whiptail species native to North America to the genus Aspidoscelis based on their monophyly using DNA and morphological analyses.