Natural History: Less arboreal than rough green snake, only occasionally climbing onto low bush branches. Active during the day April to October when it can be found in grass, in low bushes, and under rocks, boards, and other debris. Does not bite when handled, but sometimes feigns striking and voids feces and musk. Hibernates in ant hills, rodent burrows, and other retreats below ground. Mates in May and lays 5-15 thin-shelled eggs in June. Young 8-15 cm TL hatch in August. In northern populations, female incubates eggs internally for a time by basking, then lays them in a mound of rotting plants or in a sawdust pile, rotting log, or rodent burrow. Food consists of spiders, centipedes, millipedes, slugs, snails, and insects. Main predators are other snakes, birds, and mammals. 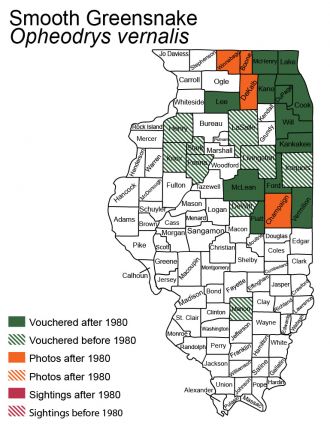 Status: Not abundant anywhere in the state. Reduced by habitat destruction and widespread use of insecticides that eliminate populations of food organisms.

Original Description: Harlan, R. 1827. Genera of North American Reptilia, and a synopsis of the species. Journal of the Academy of Natural Sciences Philadelphia. 5(2):317-372.