Similar Species: Alligator Snapping Turtle, Macrochelys temmincki, is larger as an adult, has three longitudinal keels on the carapace throughout life, has a lure appendage on the tongue, and an extra row of marginals (=supramarginals) between true marginals 4-7 and the pleurals. See Key to Illinois Turtles for help with identification.

Subspecies: Previously two subspecies were recognized in the U.S., the Common snapping turtle, C. s. serpentina, and the Florida Snapping Turtle, C. s. osceola Stejneger (1918, Proc. Biol. Soc. Washington 31: 89-92) but recent molecular data (Shaffer et al. 2008, in Steyermark et al., Biology of the Snapping Turtle) does not support this differentiation and no subspecies are currently recognized in the U.S. 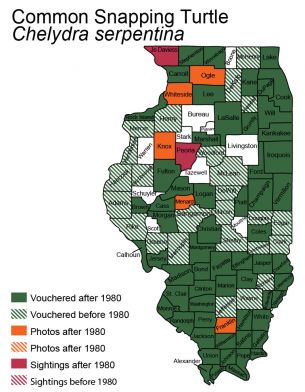 Natural History: Aggressive and menacing when encountered on land, but calm and retiring in water, where it seeks only escape when approached by humans; thus, it is little threat to swimmers. Although chiefly aquatic, it is often found away from water during spring. Eats a variety of invertebrates, vertebrates, and plants. Female lays one clutch of 20-40 spherical, leathery-shelled eggs (ca. 25-27 mm diameter) from mid-May to mid-June.

Status: Although many individuals are killed on roads and this species is heavily exploited for human food, populations appear not to be threatened at this time. Common statewide in habitats not used by fishermen.

Type Specimen: Andersson (1900.Catalogue of Linnean type-specimens…Royal Museum of Stockholm) stated that the holotype was originally in the NRM but was lost.  Iverson (1992, A Revised Checklist with Distribution Maps of the Turtles of the World) stated that NRM GA 49 is the holotype according to Wallin (pers. comm.)

Nomenclatural History: The most recent taxonomic changes are the elevation of the Central American subspecies to species and the lack of recognition of the subspecies C. s. osceola.  See Shaffer et al. in Steyermark et al., 2008, Biology of the Snapping Turtle for more details.