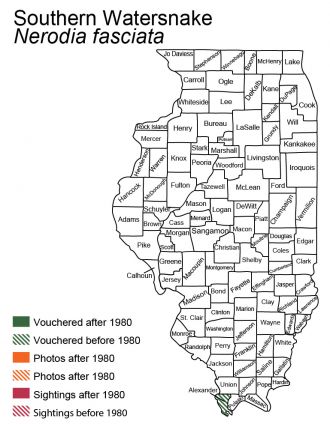 Natural History: A viviparous snake, it mates in April or May and gives birth to 15-20 young in late July or August. Newborn are 14-25 cm TL. Diet consists of fish and amphibians. Predators include other snakes and large shore birds.

Distribution Notes: Eight specimens are known from Illinois, all collected at Horseshoe Lake, Alexander County. The most recent specimen was collected in 1951 (INHS 6022). Extensive surveys in this area have not yielded any new encounters.

Status: Endangered in Illinois. Threats include drainage of wetlands and removal of aquatic vegetation.

Nomenclatural History: Much confusion has surrounded the taxonomy and nomenclature of this species, especially its distinctiveness from N. sipedon.  Smith (1961) referred to the Southern Watersnake in Illinois (Broad-banded Watersnake) as a subspecies of Natrix sipedon, Natrix s. confluens (Blanchard, 1923).  Smith (1961) listed variation in scutellation for “21 Illinois specimens from a single location”, but there are less than 10 known specimens of N. fasciata from Illinois, so he was clearly including some N. sipedon in his counts.  At the time of Smith’s writing, the range of N. fasciata was thought to extend no further north in the Mississippi valley than Louisiana. It was later shown by Conant (1963. American Museum Novitates 2122:1-38) that the subspecies confluens was in fact part of N. fasciata. Davis & Rice (1883) listed Tropidonotus fasciatus as occurring in Illinois, but Smith (1961) believed that they were actually referring to N. sipedon pleuralis. Similarly for Garman’s (1892) inclusion of Nerodia sipedon Var. fasciatus on his list.