Description: A moderately stout (up to 12 cm TL) salamander with dark markings on back, remnants of spotted juvenile pattern, that form a broad, irregular light stripe down back and onto tail. Light belly is mottled with black and light flecks. Male has enlarged jaw muscles during spring/summer breeding season. Larva with short, glistening-white gills, and 5-8 pairs of light spots on back.

Natural History: Adults are mainly nocturnal, moving about on stream banks at night. During the day they take refuge in burrows or under logs, rocks, and leaves at edge of the stream. Adults eat a variety of invertebrates and occasionally their own larvae. The tail is easily broken; many adults have short or regenerated tails as evidence of escape from predators. Mating occurs from April through July. The female curls around and guards her eggs, which are laid in a burrow, moss, or depression under log, rock, or leaves near water. Larvae hatch in autumn and wriggle into water, where they feed and grow until transforming the following spring. 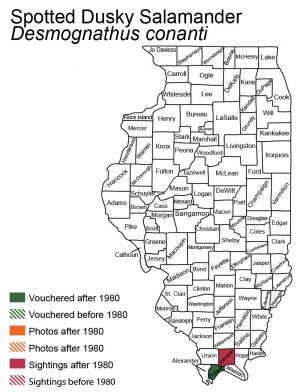 Distribution Notes: Occurs only in isolated populations in Pulaski County where the Porter’s Creek formation of absorbent clay is found near the surface, and one (probably an introduction) in Johnson County.  Most populations are found in direct tributaries to the Ohio River in ravines where the Porter’s Creek clay has been exposed by downcutting of streams.  A few populations exist just over the divide in the Cache River drainage of northern Pulaski County.

Status: Mining of the absorbent clay for kitty litter and other absorbents threatens some populations. Endangered in Illinois.

Dyer, W. G., R.A. Brandon, and R.L. Price. 1987. Gastrointestinal helminths in relation to sex and age of Desmognathus fuscus (Green, 1818) from Illinois. Proceedings of the Helminthological Society of Washington 47(1):95-99.