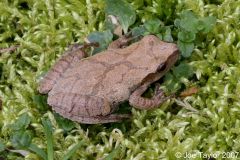 Description: Small (up to 3.5 cm SVL) tan, pink, brown, or gray frog with dark diagonal lines suggesting an “X” on back. Belly white, sometimes with dark flecks. Snout projects beyond lower jaw when viewed in profile. No light spot under eye, or light stripe on upper jaw. Male with folded skin under throat indicating vocal pouch.

Natural History: Aptly named because it is one of first frogs to call each spring. Diet consists of small insects and spiders. Mates late February through May; some males call in autumn. Call is a soft, clear, ascending “peeeep” repeated about once each second and heard both day and night. Males commonly call in alternating duets or trios while perched in vegetation over water or on surface of water. Several hundred eggs per female, attached singly to sticks or leaf petioles, hatch in a few days, and tadpoles transform in about two months. 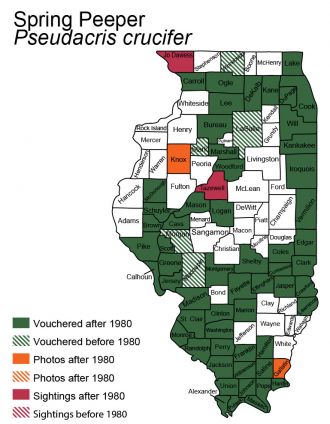 Distribution Notes: Found throughout much of the state, except in the Grand Prairie.