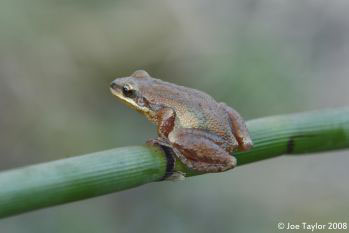 Similar Species: All three of the members of the “trilling chorus frog” clade in Illinois (feriarum, maculata, and triseriata) are quite similar, if not identical, in appearance.

Description: Small (up to 4 cm SVL) gray, tan, or brown frog with dark spots or stripes. Belly cream with scattered dark flecks. Middle section of leg (tibia) at least 47% as long as SVL. Distinct dark stripe on each side from snout through eye and along side to groin. Male smaller than female. Male with dark vocal pouch during breeding season.

Habitat: Forests, forest edges, and nearby open marshy fields. Breeds in nearly any shallow, temporary body of water, even a considerable distance from forest.

Natural History: To many people the calls of this frog and spring peepers are the symbols of spring. Diet consists of small arthropods. Mates late February through May, peaking in March. Males often chorus in large numbers while perched at edge of water or floating on it. Call is similar to sound produced by running finger down teeth of comb. Eggs (about 100 per female) are laid in elongate clusters attached to sticks or leaf petioles. Embryos hatch in a few days and tadpoles transform in about two months.

Distribution Notes: Lemmon et al. (2007, Mol. Phylogenet. Evol. 44: 1068–1082) revised the geographic limits of these three species based on extensive DNA sequence data.  They present a rough range map, but their limited geographic sampling leaves the precise distributions in question.  Analysis of calls and molecular characterization are required to distinguish among the members of this clade, so refinement of the ranges is not a simple task. Based on current understanding and sampling, the range of P. feriarum in Illinois is limited to a single site in Pulaski County, while triseriata inhabits the remainder of southern Illinois north to a line approximately from Monroe County to Crawford County, and maculata the remainder of the state.

Agassiz, L. 1850. Lake Superior, its Physical Character, Vegetation, and Animals, Compared with Those of Other and Similar Regions, with a Narrative of the Tour, by J. Elliot Cabot, and Contributions by Other Scientific Gentlemen. Part. II. Natural History.  Boston: Gould, Kendall and Lincoln.

Nomenclatural History: All three of these taxa have a had a somewhat complicated nomenclatural history, moving from their original genera to Pseudacris then to Chorophilus, then under C. nigrita as subspecies, and finally feriarum and maculata were considered subspecies of triseriata before being re-elevated to full species.