Key Characters: Dark mask on side of face that obscures lower half of eye; dorsolateral fold extends from eye to hip; tympanum smaller than eye; 2-3 joints of the 4th toe free of webbing.

Similar Species: No other Illinois frog has a dark mask on the side of the face and extensive dorsolateral folds. See Key to Illinois Frogs & Toads for help with identification.

Natural History: Well camouflaged to move about on forest floors, feeding and making long, low leaps when disturbed. Diet includes a variety of invertebrates. Large breeding aggregations appear in ponds and vernal forest pools after first warm rains of spring (early-February to March in south, late-March to April in north). The 5-6 clucking sounds of individual mating calls do not carry far. Female lays 300-900 eggs that hatch in 10 days to two weeks. Tadpoles grow rapidly and transform in May in the south, June in the north. 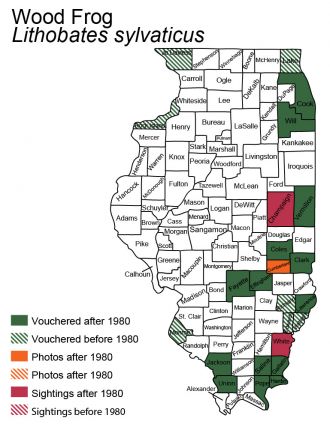 Distribution Notes: Sporadic in occurrence. Absent from seemingly suitable habitat in many parts of Illinois, especially the Southern Tillplain. The presence of the Wood Frog in northwestern Illinois is indicated by one specimen from Rock Island County collected in 1940 and four specimens collected in Jo Daviess County in 1951. Similarly, the seemingly isolated population in Monroe County is represented by two specimens, collected in 1923 and 1948.

Status: Listed as a Species in Greatest Need of Conservation in the Illinois Wildlife Action Plan.

Original Description: LeConte, J. 1825. Remarks on the American species of the genera Hyla and Rana. Annals of the Lyceum of Natural History of New York. 1(Part 2):278-282.

Nomenclatural History: Gunther (1859 “1858”. Catalogue of the Batrachia Salientia in the Collection of the British Museum. London: Taylor and Francis) considered sylvaticus (spelled silvatica) a subspecies of R. temporaria.  This was later reversed in a complicated series of transfers.

Junior synonyms used in the Illinois herpetological literature include Rana cantabrigensis Baird,1854 (Descriptions of new genera and species of North American frogs. Proceedings of the Academy of Natural Sciences of Philadelphia 7: 59–62) which was eventually placed as a subspecies of sylvaticus.  Martof & Humphries (1959, Amer. Midl. Nat. 61: 350–389) reviewed the morphological variation and found no basis for recognition of subspecies.  Smith (1961) rejected their position based on “their personal attitude toward subspecies”.

Frost et al. (2006, Bull. Am. Mus. Nat. Hist., 297: 369) removed sylvatica (and most other North, Central, and South American ranids) from Rana and placed it in Lithobates based on extensive DNA sequence data, but not all workers agree with this arrangement because of the instability this brings to well-known taxa such as Rana catesbeiana. AmphibiaWeb recommends using Rana (Lithobates) sylvatica to demonstrate that it is a member of the subgenus Lithobates while preserving long-standing taxonomy.