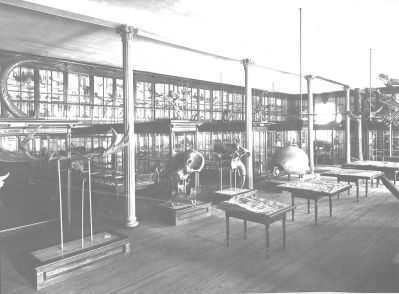 The Space: Exhibits and displays catering to public viewing were probably in existence on the campus as early as the completion of University Hall in 1873.  The photo above, of University Hall in 1892, is the earliest available of such exhibits.  As University Hall was completed in 1873, natural history exhibits were extant sometime after 1873, but exactly when is unknown.  The first mention of the term “museum” appears along with the above photo.  The exhibits were moved to the Natural History Building (Natural History Hall) in 1909.

The following passage is from the 1920 book “Sixteen Years at the University of Illinois” written by University president Edmund J. James:

“…. the collections of Natural History were contained in a large room in University Hall. This room was poorly lighted and the collections were in constant danger of destruction by fire. In 1909, the material was removed to the fireproof hall in the new addition to the Natural History Building. Since the new hall has but two-thirds as much floor space as the old room in University Hall, it has been necessary to utilize a room on the upper floor of the Physics Building to care for the surplus collections. A quantity of material not affected by dampness has also been stored in a large room in the basement of the Natural History Building.”

This led campus administrators to seek a “museum building”.  In 1892, Nathan C. Ricker (Dean of College of Engineering, Professor of Architecture)  proposed a new building, the “Natural History Museum” to the Board of Trustees:

From Board of Trustees Proceedings 1890-2:

“Arranged to be located about 50 feet south of the Natural History Hall, leaving a space of 20 feet between it and Mr. Bronson’s land. Extreme dimensions 124 feet square. Comprises basement story of stone and two stories of pressed brick with trimmings of stone and ornamental bricks similar to those of Natural History Hall. Deck roof of tin over main square portion of the building, with a raised slated central portion. This building is connected with the principal floors of the Natural History Hall by corridors on the same levels. Also with side entrances to basement on east and west, with stairs to the different stories.

This building contains museum office, clothes and toilet room, also a large central hall 60 feet wide, galleries 14 feet high and 12 feet wide, central height 63 feet from floor, raised roof with skylights and supported by steel, hammer beam trusses: also two stories on each side of the building arranged in museum alcoves, 14 feet high in clear, and to be divided at pleasure.

This building is designed to combine the advantages of the popular museum with its large hall and galleries, all lighted from the roof and arranged to produce a pleasing and imposing effect, and intended to satisfy the popular interest, together with the scientific museum for specialists with its collections arranged in separate alcoves or rooms, each containing duplicate specimens, tables for work, etc., and other conveniences for original research.”

The cost of the building was estimated at $148,000. The Board took no action on Professor Ricker’s proposal.  Obviously, it was never built.

The Natural History Collection continued to grow, but the space allotted did not.  Edmund James, in his 1920 book “Sixteen Years at the University of Illinois” states:

“Since the removal of the collections from the old hall, much valuable material has been acquired. Among this material are … extensive collections of mollusks from North and South America, including a very complete collection of the river mussels (Unionidae) of the United States; and a collection of the more common minerals. The Museum collections now number upwards of 200,000 specimens.

During the curatorship of Professor Frank Smith the old wooden cases were largely replaced by the modern bronze and glass cases, so that a greatly improved appearance in the exhibition hall has been effected. The collections have also been cataloged, both numerically in book form and indexed by cards, and it is possible for the first time in the history of the Museum to know what is in the possession of this department.

The increase in the Museum collections and the demand for their proper display made it evident that sooner or later it would be necessary to appoint a trained museum man who could give his entire time to the development and care of the Museum. In January, 1918, this was done.”

This “trained museum man” was undoubtedly Frank C. Baker (see below).  Baker wrote several important articles on the importance of natural history collections and museums.  Baker’s feelings on this subject were paraphrased by Edmund James in his 1920 book:

“The time is evidently not far distant when a Museum Building will be a necessity on the campus and the arrangement of the exhibits and the accumulation of the research series are planned with this end in view. With comfortable rooms in which the research series may be made accessible to advanced workers, the museum will become a center of scientific study, where the botanist, the geologist, the zoologist and the ethnologist may come and find material upon which to base their papers and books. The undergraduate student, as well as the casual visitor, may visit the exhibit halls and supplement the information received in the lectures and in the texts.”

Even with the seemingly strong support for a museum building, the exhibits and research collections continued to be housed in the Natural History Building, although the space alottment was eventually increased.  The collections and many of the exhibits were moved to the 4th floor and a series of curators were hired over the next 60 years (see below).

Most of the original exhibits and collections were still in the Natural History Building as late as 2002, but curators were long gone by this time and the Museum Director was reduced to a part-time position.  Space needs soon resulted in a wholesale move of the exhibits and the unclaimed collections to the Illinois State Museum in Springfield.

Staff: The first person noted as a “Curator of the Museum of Natural History” in lists of University faculty is Frank Smith (1857-1942) (PhB Hillsdale College, 1885; A.M. Harvard, 1893).  He served as curator from 1900 to 1917.  Frank Smith started his career at the University in 1893 as an “Instructor” in the Zoology Department.  In 1894 he he was appointed Assistant Zoologist and Superintendent of the Biological Station at Havana with the State Laboratory of Natural History (later renamed the Illinois Natural History Survey) and an “Assistant” in the Zoology Department.  As early as 1901 he taught a course in Statistical Zoology.  In 1913 he was promoted to the rank of Professor in the Zoology Department.  He retired from the University in 1926 and was given emeritus status.  He retired for good after the 1941-42 academic year.  Frank Smith also taught summer courses at the University of Michigan’s Douglas Lake Biological Station.  See Trans. Illinois Acad. Sci. 1942. 35:23-24 for a “memoir” written by Harvey J. Van Cleave.

In January 1918, Frank Collins Baker (1867-1942) was hired as Curator of the Museum of Natural History so Frank Smith’s full attention could be devoted to the Zoology Department.  F. C. Baker continued as curator until his retirement in September of 1939.