Description: Large (up to 10 cm SVL) gray, brown, or reddish brown toad with numerous dark spots on back and heavily mottled chest and belly. Large bean-shaped parotoid gland behind each eye contacts cranial crests by short spur. Cranial crests higher than in Fowler’s toad and more massive. The dwarf subspecies is much smaller and has less extensive mottling on chest and belly.

Habitat: Virtually all forest and prairie habitats in Illinois, including urban and agricultural areas, where flooded fields, ditches, and other bodies of water are available for reproduction.

Natural History: Outside of the breeding season, adults can be found under logs, rocks, and surface debris even in extremely dry microhabitats. Diet includes insects and earthworms. Poisonous skin secretions deter some predators. Breeding occurs from mid-April to early May when sustained high-pitched trills of males are heard from almost every aquatic habitat. Young males may call through late summer. Females lay several thousand black eggs in long strings held together by semitransparent membranes. Eggs hatch in a week and small jet-black tadpoles, which usually congregate in shallow water, transform within 40 days. Hundreds of tiny metamorphs are sometimes seen crossing nearby roads and trails. 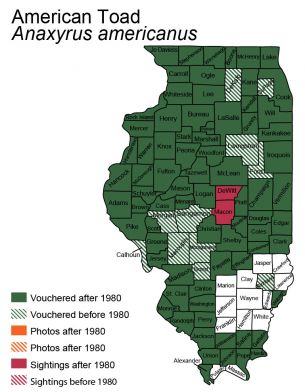 Distribution Notes: Phil Smith (1961) pointed out that there are no records for either subspecies of the American Toad in the Wabash Border Natural Division of Illinois.  As the current distribution map illustrates, this is still true today, even though suitable habitat exists in this area.  The single record for Richland County is from 1885, “Olney” and was almost certainly collected by Robert Ridgway. I have not examined this specimen (USNM 14175).  Two specimens are known from Wabash County, but I have not examined either. The distribution map for the American Toad in Minton’s (2001) revised 2nd edition of the Amphibians and Reptiles of Indiana also shows a lack of records in the adjacent area of the Wabash valley in Indiana.

Nomenclatural History: The American Toad and the Dwarf American Toad have a long and complicated taxonomic history. Soon after Holbrook described the species Bufo americanus, it was reduced to a variant (subspecies) of B. lentiginosus Günther, 1859 “1858” (Cat. Batr. Sal. Coll. Brit. Mus.: 63). Gaige (1932, Copeia, 1932: 134), considered it a full species, but Netting and Goin (Copeia, 1946: 107) placed it the synonymy of B. terrestris (Bonnaterre, 1789) as a subspecies B. t. americanus.  During this time, Bragg named a new subspecies of B. terrestris, Bufo terrestris charlesmithi (Bragg, A.N. 1954. Bufo terrestris charlesmithi, a new subspecies from Oklahoma. Wasmann Journal of Biology. San Francisco 12: 245-254). Holotype: OKMNH 26359 (formerly A.N. Bragg 32). Type locality: “1.8 miles south, 7 miles east of Norman, Cleveland County, Oklahoma”, USA.  Bufo americanus was elevated to full species again by  Blair (1957, Texas J. Sci., 9: 106) and Phil Smith (1961, The amphibians and reptiles of Illinois. Illinois Natural History Survey Bulletin 28: 1-298) was the first to use the trinomial B. a. charlesmith, but he did so without explanation. Finally, Frost et al. (2006, Bull. Am. Mus. Nat. Hist., 297: 363) transferred the North American (north of Mexico) species of Bufo to Anaxyrus to eliminate the paraphyly of the genus Bufo.